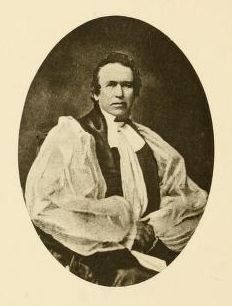 James Hervey Otey, teacher, missionary, and first Protestant Episcopal bishop of Tennessee, was born at Mount Prospect, the family home at Liberty, Bedford County, Va. He was the son of Isaac and Elizabeth Matthew Otey. Although his parents were not active church members, his mother was a descendant of Tobie Matthew (1546–1628), bishop of Durham and archbishop of York. Otey was graduated from The University of North Carolina in 1820 and remained for the 1820–21 term as a tutor of Greek and Latin. In 1821 he married Eliza (Betsy) Pannill, the daughter of a widow who kept a boardinghouse for students in Chapel Hill. As a tutor Otey was called upon to lead chapel services, but his lack of experience caused him considerable concern until a friend named Piper (perhaps the Alexander Piper who joined others in giving land on which the university was located) offered him a copy of the Episcopal Book of Common Prayer. His use of it led to an understanding and appreciation of the church.

From Chapel Hill Otey and his wife went to Franklin, Tenn., where he established Harpeth Academy, a school for boys, near the end of December 1821. It was not long, however, before they were back in North Carolina and Otey was principal of the Warrenton Academy (1823–25). As was the practice in the case of alumni who followed a promising professional career, The University of North Carolina awarded Otey an M.A. degree three years after graduation. While in Warrenton, he was baptized by the Reverend William Mercer Green, his classmate at the university, and confirmed by the Right Reverend John Stark Ravenscroft. In 1825 Bishop Ravenscroft admitted Otey to the diaconate, and in 1827 he elevated him to the priesthood at St. Matthew's Church, Hillsborough.

Assigned to the mission field of Tennessee, Otey returned to Franklin, south of Nashville near the center of the state. Before the end of 1827 he had organized another school as well as St. Paul's Church in Franklin and Christ Church in Nashville. For eight years, as one of only two Episcopal priests in the state, he served as missionary, pastor, and teacher. In 1829 Bishop Ravenscroft visited him and in Nashville organized the Diocese of Tennessee. The church grew and in 1833, with five priests and one deacon, Otey was elected bishop. In recognition of this new step in his life, Columbia College in South Carolina awarded Otey an honorary D.D. degree in 1833. He was consecrated in Philadelphia on 14 Jan. 1834.

As a frontier bishop, Otey rode thousands of miles each year rendering service not only across the long state of Tennessee but also in Florida, Louisiana, Mississippi (of which he was formally designated provisional bishop until his friend, William Mercer Green, became bishop in 1850), Arkansas, and the Indian Territory. Because of growing physical infirmities, Otey was encouraged by his friends and assisted financially to take a year off. From April 1851 to March 1852 he visited England, where he was well received and participated in a number of religious services. After returning home—to be a little nearer the center of his territory and to make travel by water more accessible, although he had been relieved from service in parts of the vast region he formerly served—he settled in Memphis.

Over the years Otey was responsible for the establishment of five schools, and he conducted one in his home from 1825 to 1852. One of his educational ambitions was to see an institution of higher education established in the South from which men trained in literary and theological subjects would go out to serve the people of the region. His idea took root, and on 4 July 1857 an organizational meeting was held at Lookout Mountain near Chattanooga. Otey was elected chairman and in time also chancellor of the new institution. Chartered in 1858, the University of the South had the promise of $500,000 and the cornerstone was laid in the fall of 1860. The approaching conflict intervened, and work did not resume until after the Civil War.

As a Whig, Otey was active in trying to avert war. Futile though his efforts were, he wrote the U.S. secretary of state urging that steps be taken to restore peace. In services he conducted during the war, taking a neutral stance, he used a section of the Book of Common Prayer that did not contain the customary prayer for the president.

Otey's attachment to North Carolina remained strong throughout his life, and he was often in the state. He returned to conduct the service for his old teacher and friend, Elisha Mitchell, at the reinterment of Mitchell's remains atop the mountain that bears his name. Bishop Otey delivered the commencement sermon in Chapel Hill in 1857, and he attended the commencement of 1859, when both he and President James Buchanan were awarded honorary LL.D. degrees.

A number of his sermons were published, and he was the author of Doctrine, Discipline and Worship of the American Branch of the Catholic Church, Explained and Unfolded in Three Sermons (1852). Otey was the father of nine children. He died in Memphis. His remains were held in a receiving vault until after the war, when he was buried in St. John's churchyard at Ashwood near Franklin, Tenn.

Works by or about James Hervey Otey on Internet Archive. https://archive.org/search.php?query=otey%2C%20james%20AND%20collection%3Aamericana (accessed September 28, 2014).