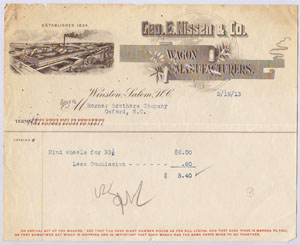 John Philip Nissen, wagon manufacturer, was born at Friedland in Forsyth County, the son of Christian and Salome Vogler Nissen. He was the grandson of Tycho Nissen, who was born in Denmark in 1732 and arrived in Salem in 1770.

At age twenty-one, J. P. Nissen started a small wagon factory in the village of Waughtown and managed the business until after the Civil War, when two of his sons, George E. and William M., began to operate the firm under the name of the George E. Nissen Wagon Works. At the peak of production, this company produced about ten thousand wagons a year. John Israel Nissen, another son of J. P. Nissen, also established a wagon factory, which he later sold to his brother, Christian Francis (Frank).

The George E. and J. I. Nissen wagon factories were consolidated in 1910 and continued to operate under the Nissen name until 1925, when the firm passed into other hands. 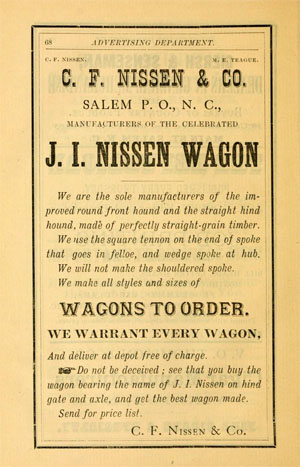 William M. Nissen, the most successful son of J. P. Nissen, became a millionaire and made a large investment in the eighteen-story Nissen Building, erected in 1927 on the corner of Fourth and Cherry streets in Winston-Salem.

He was buried in the cemetery at Friedland Moravian Church.