The Nissen Wagon Works, located in Forsyth County, was one of the largest wagon makers in the South during the nineteenth century. In 1834 John Philip Nissen opened a wheelwright shop on Waughtown Hill, four miles south of the Moravian town of Salem. The son of a Broadbay farmer, the younger Nissen breathed new life into an industry that had withered among the Moravian settlements following the death of his Danish-born grandfather, wagon maker Tycho Nissen, in 1789. From 1834 through 1837 (when Salem wheelwright Ernst Henry Meinung expanded his small carriage-making business) Nissen, operating without competition, thrived by meeting the emigrants' need for wagons. 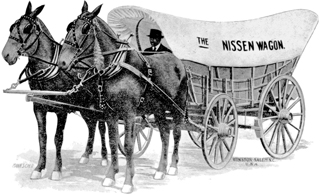 By 1850 Nissen and his six employees were producing 65 wagons annually, far more than his competitors such as Meinung, whose six-man work force managed to turn out a mere 12 carriages on a yearly basis. The good years that followed found Nissen tripling the amount of capital invested in his business as he purchased steam- and horse-powered machinery to double his production capacity. Increased competition also accompanied the 1850s in the form of William E. Spach's nearby wagon works, which opened in 1854 and supplied wagons whose quality rivaled those made by Nissen. Together, the two firms would dominate Forsyth's wagon-making industry through the second half of the nineteenth century and well into the twentieth. Following Nissen's death, his sons, George E. and William M. Nissen, assumed control of the business and guided it until 1925, when it was sold for nearly $1 million.

A Nissen wagon as shown in an advertisement that appeared in the Southern Tobacco Journal, 17 June 1919. Courtesy of North Carolina Office of Archives and History, Raleigh.