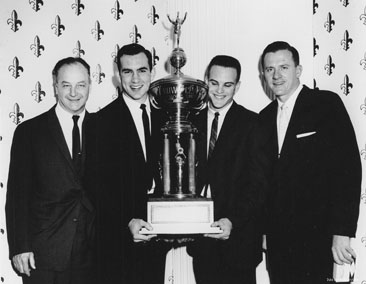 William David Murray, football coach and athletic administrator, was born in Rocky Mount, one of eight children of Orion D. and Emma Whiteman Murray. He attended the Hill Street Graded School and Rocky Mount High School. During his senior year he was an all-state football back, coached by Jimmy Simpson, a former Trinity College player.

Murray entered Duke University in the fall of 1927. He starred on the freshman football team that year and on the varsity team, coached by Jimmy DeHart, from 1928 to 1930. While a senior he rushed for 1,030 yards, was voted the team's most valuable player, and made the all-southern team as a halfback. Murray also ran track, and during his senior year he helped coach the freshman basketball team. He was voted best all-around member of his freshman class and was president of the men's Student Government Association as a senior. At commencement he received the Robert E. Lee Award as Duke's outstanding senior.

In the spring of 1931 Murray became the principal and coach of all sports at the Methodist Children's Home in Winston-Salem; he also taught history and geography. In ten years as football coach at the home, he compiled a record of 69 wins against only 9 losses and 3 ties.

In 1940 Murray left Winston-Salem to become head football coach at the University of Delaware. Coaching through the 1950 season, with a three-year interruption during World War II, he achieved a record of 49 wins, 16 losses, and 2 ties, with undefeated seasons in 1941, 1942, and 1946. At Delaware he also served as athletic director (1940–45); director of the Division of Student Health, Physical Education, and Athletics; and president of the faculty club.

In 1951 Murray returned to Duke as the head football coach, succeeding Wallace Wade, who had left to become commissioner of the Southern Conference. He coached at Duke for fifteen seasons, only two of which were losing seasons. His teams won the Southern Conference championship in 1952 and the Atlantic Coast Conference championship in 1954, 1960, 1961, and 1962. In 1953 and 1955 Duke was cochampion of the ACC. Murray was voted Southern Conference coach of the year in 1952 and ACC coach of the year in 1954, 1960, and 1962. His Duke teams were ranked in the final wire services' top twenty eight times and played in three bowl games: a 34–7 victory over Nebraska in the Orange Bowl after the 1954 season, a 48–21 loss to Oklahoma in the Orange Bowl after the 1957 season, and a 7–6 Cotton Bowl victory over Arkansas following the 1960 season. His twelve Duke All-Americans included Mike McGee, winner of the 1959 Outland Trophy as the nation's best lineman. Murray won 93 games, lost 51, and tied 9 at Duke.

After the 1965 season, Murray left coaching to take a position as executive director of the five-thousand-member American Football Coaches Association. His duties included scheduling clinics, printing yearbooks, making public appearances, and coordinating the association's annual midsummer All-Star game. Murray had long been active in coaches' organizations. At the University of Delaware, he was president of the Middle Atlantic States Collegiate Athletic Conference (1947–49) and a member of the executive council of the Eastern College Athletic Conference. At Duke, he was active in the American Football Coaches Association and served as president in 1962. While executive secretary of that organization, he was chairman of its ethics committee. He was also on the board of directors of the National Football Hall of Fame. Murray maintained his residence in Durham, discharging his AFCA duties by telephone, correspondence, and travel. He retired in 1982.

On 30 Aug. 1930 he married a fellow Duke student, Carolyn Kirby of Decatur, Ga. She was one year behind her husband and left without a degree. After returning to Duke, she received her degree in 1959 and then taught school for several years. The couple had three daughters: Joy, Marilyn, and Carol. Murray was active in Durham civic and charitable enterprises, particularly Easter Seals. He was a member of Epworth United Methodist Church, Durham, and the Fellowship of Christian Athletes; in the late 1960s he was president of the national FCA.