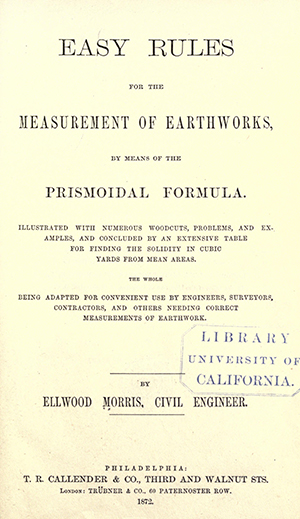 Ellwood Morris, civil engineer, was born in Pennsylvania. Nothing is known of his parents other than the fact that in 1846 his father, also a civil engineer, was an assistant to Charles Ellet, Jr., engineer and president of the Schuylkill Navigation Company. At age eleven, while a student, Ellwood was living in Bucks County in the household of John D. James, a sixty-one-year-old farmer, conceivably a relative. The Philadelphia city directories for 1843 and 1844 list him as a "conveyancer" of 22 Prune Street (now Anchor Court, near the waterfront). From 1844 to 1847 Morris was a member of the board of managers of the Franklin Institute in Philadelphia (secretary, 1844). He wrote numerous articles on various engineering subjects that were published in the Journal of the Franklin Institute. During this period he also was engaged in locating and building the Baltimore and Ohio Railroad. The directories for 1845–47 list him as a civil engineer at the Prune Street address. According to the 1850 census of Schuylkill County, however, Morris was an "agent" living in the household of Elijah Airgood, a thirty-two-year-old canal lock tender.

On 27 Apr. 1859 the state-owned Cape Fear and Deep River Navigation Company of North Carolina appointed Morris chief engineer. A Raleigh newspaper described him as a distinguished civil engineer, "widely known as a scientific writer on matters in the line of his profession, and as chief engineer in various railroads and canals." His experience with hydraulic works, it was reported, "fit him in a pre-eminent degree for the improvement of river navigation." With crews of African Americans, including some hired slaves, as well as white laborers hired locally and in Pennsylvania, Morris proceeded to make the Cape Fear River navigable from Wilmington to Averasboro. He submitted frequent reports to Governor John W. Ellis, as well as regular statements of his expenses. The governor and officers of the company visited the work site a number of times during 1859, 1860, and the spring of 1861, when the project was completed.

Various railroad officials also called upon Morris to examine their lines and make recommendations for necessary work. Early in February 1861 he returned home on furlough. Afterwards he informed Governor Ellis that he had been offered an important post with the Lackawanna and Bloomsburg Railroad in Pennsylvania but declined it because he considered himself obligated to North Carolina.

North Carolina's secession from the Union on 20 May 1861 seems to have had no effect on Morris's decision to remain in the state. Earlier, he had switched the scene of his work from the inland waters to the coast and prepared a report on the importance of Ocracoke and Hatteras inlets. Sometime before 20 May he was referred to as Colonel Morris, a title that continued to be applied to him as long as he remained in North Carolina. From 29 April until the end of August 1861, he was busily engaged in supervising the construction of forts and coastal defenses along the Outer Banks. Morris designed and built Fort Oregon, and when a council of war in September resolved to evacuate it, he objected. Both Fort Oregon and Fort Ocracoke, he maintained, were well built, located, and equipped, and they could be held. He did not prevail, of course, and so in August 1861 Federal forces took possession of the sounds of North Carolina, an action later termed "one of the most important events of the war."

In order to gain access to the coal fields along Deep River, the state chartered the Chatham Railroad and appointed Morris the chief engineer responsible for locating and constructing it. By 1 Nov. 1861 he was in Fayetteville. He worked well and accurately, and in 1862 and 1863 he reported regularly to Kemp P. Battle and Henry A. London, officers of the line. Work on laying out the route was completed by the fall of 1863. On one occasion he took time out to advise the mayors of Fayetteville and Wilmington concerning the defense of their towns; afterwards he went to Charleston, S.C., for the same purpose but was not well received. Battle noted later that Morris became homesick in 1863 and wanted to go home to visit his aged parents; an assistant, Henry A. Brown, was capable of continuing the work on the railroad. Morris himself, however, wrote that he wished to go to a neutral port, preferably to an English possession, so that he could take steps to secure about $35,000 that he had left in the North; he might lose the money if he remained in the South and did not protect it. Confederate authorities refused to issue him a passport, but with Battle's intervention he obtained documents permitting him to pass through the lines to Newark, N.J.

Morris finally left the state in August 1864. Just before his departure, he asked Battle to care for his cat and pet chickens. After the war, in 1867, he wrote from Camden, N.J., his mother's home, that he had received a cool reception from his Northern neighbors because he had remained in the South. The U.S. Post Office even refused to deliver mail to him. Before leaving North Carolina, Morris assured his friends that he was going for personal—not political—reasons, and that he would return to continue his professional work. He then anticipated that the war would last for some time: "I hope, & always have hoped, that the South would succeed in her objects, because I believe the northern people are wrong & misguided in this War." Morris counted himself more loyal to the South, he wrote Henry A. London on 5 Mar. 1862, than many there who attacked him for being a Northerner.

On 28 June 1865 Morris wrote a cordial letter to his old friend Kemp P. Battle, thanking him for his efforts the previous August that enabled him to return home. He had found his mother well although feeble, and she also sent her thanks to Battle. Two years later, in May 1867, Morris sent Battle a very long, sympathetic letter about conditions in the South and the reaction of Northern newspaper editors. Morris hoped that white Southerners would remain united politically and that reasonable blacks would join them in establishing a stable government and society.

The 1870 census of the North Ward of the city of Camden lists a household headed by fifty-six-year-old Ellwood Morris, a civil engineer, and twenty-one-year-old Elizabeth Morris, a native of England, whose occupation was "keeping house." Mary Ann Morris, aged sixteen and a native of Pennsylvania, completed the family except for Mary McCue, aged twenty-five and a native of Ireland, who was a domestic servant.

Morris died of dropsy (edema) in Camden at age fifty-nine. His home at 509 Cooper Street, built about 1840, was torn down soon after 1922 to clear the site for an office building.

Charles B. Stuart, Lives and Works of Civil and Military Engineers of America (1871).

Morris, Ellwood, and Latrobe, Benjamin Henry. Report Upon the Railroad Surveys Between Hillsborough and Chillicothe: In the State of Ohio. Ben Franklin book and job office. 1851. https://archive.org/details/reportuponrailr00latrgoog (accessed November 22, 2013).

Morris, Ellwood. Chesapeake and Ohio Canal: General Estimate of the Aggregate Cost of the 50 Miles of Canal Between Dam No. 6 and Cumberland : and of the Work Done and to be Done Thereon, Upon the 1st of January, 1841. Frederick: Rigney and McLanahan, 1841. http://books.google.com/books?id=xpE2AQAAMAAJ&pg=PP7#v=onepage&q&f=false (accessed November 22, 2013).