Lucy Calista Morgan, founder of the Penland School of Handicrafts, was born in the Cartoogechaye community of Macon County, the daughter of Alfred and Fannie Eugenia Siler Morgan. She received her earliest 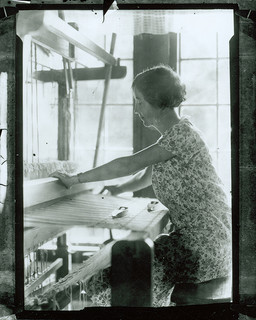 education in Hickory at a private school operated by her aunt; afterwards she attended Central Michigan Normal School in Mt. Pleasant, Mich., and became a certified teacher. For several years she taught school in Michigan, Illinois, and Montana, and in the summer of 1916 and 1917 she studied at the University of Chicago. She also worked briefly for the Children's Bureau of Chicago.

From 1920 to 1923 she was principal of the Appalachian School, operated at Penland, N.C., by the Episcopal church. With the decline of that institution, she founded in 1924 a community handicraft program that was later known as the Penland School of Handicrafts. In preparation for this step, she went to Berea College in Kentucky to observe and study the craft activities and training it offered. Through the Penland School, Lucy Morgan aroused the pride of North Carolina mountain people in their traditional crafts and revived skills in weaving, metalwork, wood carving, and jewelry and pottery making which had almost disappeared. A ready market was found for the unique and attractive pieces produced by the local people and the students who soon arrived to learn these crafts. "Miss Lucy," as she was called, conducted tours of the Scandinavian countries to acquaint Americans with crafts there; she also arranged for the exchange of students between her school and similar schools in Finland. Penland was incorporated in 1929 and came under the direction of a board of trustees in 1938. In time it became the largest and the best-known institution of its kind in the United States.

On the eve of World War II, more than sixty looms were in operation at Penland and the school attracted students from many parts of the nation. For her work there Lucy Morgan received honorary degrees and awards of various kinds. On one of these occasions she was characterized as being a teacher, philosopher, humanitarian, and creative artist. On her retirement as director on 1 Sept. 1962, she was succeeded by William J. Brown, who held degrees in the fine arts. Never married, Miss Lucy was survived by a brother and a sister. A member of the Democratic party and the Episcopal church, she was buried in St. John's churchyard, Cartoogechaye.