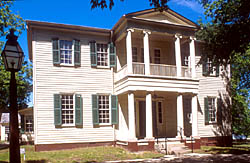 [Mrs.] Ellen Mordecai Mordecai, author, was born in Mordecai House, Raleigh, the daughter of Moses (1785–1824) and his first wife, Margaret (Peggy) Lane Mordecai (ca. 1786–1821). She was named for her father's sister, author and teacher Ellen Mordecai (1790–1884). When Ellen was less than two years old her mother died, and she was raised by three aunts who lived in the home, one of whom, Anne Willis (Nancy) Lane, her father married in 1824. In the same year, her father died; his half brother, George Washington Mordecai (1801–71), became the guardian of Ellen, her brothers HenryMordecai, Jacob and Jacob, and her half sister Margaret.

Her early education was begun in the Richmond home of her paternal grandfather, Jacob Mordecai (1762–1838), by her aunts Ellen and Rachel, who from 1809 to 1818 had assisted Jacob in conducting the popular Mordecai Female Seminary in Warrenton. Next she spent several years in the Warrenton school, reopened by her aunt, Caroline Mordecai (Mrs. Achille) Plunkett. For one year she was tutored at home by a governess "from the North," as she described her, a Miss Quincy. In her teens she attended Miss Hawkins's seminary in Philadelphia. She became, as a later writer said, "a thorough French scholar, possessing a knowledge of many of the master-pieces in that language," and "her thorough acquaintance with the polite literature of England and America was a source of wonderment and admiration to all who knew her."

After 1840, when her brother Henry became the owner of Mordecai House, Ellen lived with their stepmother in a home (since demolished) called Will's Forest in an area off Glenwood Avenue now marked by Devereux and Will's Forest streets.

The family had a farm at Scotland Neck on the Roanoke River, where they spent the summer of 1852. On 22 August Samuel died of what was variously diagnosed as pneumonia or consumption. The widow and daughter went to live with the sisters of Ellen's father in Richmond, Va. Four months later her second child, Samuel Fox II, was born on 12 Dec. 1852. Her own former guardian and uncle, George W. Mordecai, became guardian of the two children.

About 1854 Ellen and the children returned to Raleigh, where for twenty years they lived at the northeastern corner of Wilmington and North streets in the house later owned by Episcopal Bishop Theodore B. Lyman. In the late 1860s and early 1870s she taught school. About 1874 construction was completed on the new house she built at the corner of Person and North Boundary streets. Later owners moved the house about 1934 to 318 North Boundary Street, where it subsequently housed several apartments, was used as an antique shop, and in the 1970s became a private home again. It is listed in the Historic Oakwood Walking Tour guide as the Ellen Mordecai House.

Known for her personal charities, Mrs. Mordecai helped to support several indigent individuals by having regular orders of groceries delivered to them. A News and Observer obituary noted that "the former slaves owned by her family found her a kind and sympathetic helper in time of need." Her granddaughter wrote that "her original wit and humor, her kindness, her benevolence, her charm, made her beloved by all—high and low, young and old." Samuel Fox Mordecai II attended private schools and the University of Virginia; he received a law degree from Trinity College, Durham, where he was dean of the School of Law from 1904 until his death on 29 Dec. 1927. He married in 1875 Elizabeth (Bettie) Grimes (1853–1946), the daughter of Confederate General Bryan Grimes of Grimesland, and they had three daughters and six sons. His sister Margaret married Calhoun Tyler Morel (1845–98), a Georgia railroad official, and had four daughters and two sons. She died in Savannah, Ga., on 11 Sept. 1927.

In the last years of her life, "Granny" Ellen moved from Raleigh to Durham to live with her son and his family on the Trinity College campus. There, at age eighty-six, having lost her eyesight, she dictated to her granddaughter Anne Valleau Morel (1875–1961) her reminiscences, particularly of her childhood at Mordecai House. These, together with a letter to a great-grandson, Mrs. Morel published as Gleanings From Long Ago (1932). In 1974 the Raleigh Historic Properties Commission, Inc., and the Mordecai Square Historical Society, Inc., reprinted the volume with an introduction and index for the use of students interested in its wealth of material on nineteenth-century life.

Mrs. Mordecai died in her ninety-sixth year at her son's home. Her funeral was conducted from Christ Church, Raleigh, where she had been a communicant since age nine. She was buried in the Mordecai family section of Oakwood Cemetery, Raleigh. At her death Robert L. Gray, editor of the Raleigh Times, described her as "a woman whom all the city loved for the gentleness and sympathy of a life that at one time or another touched that of almost every person in it" and as one "who never gave up her books [and] who wrote with the sprightliness of a girl." The News and Observer added that "age never dimmed her intellect, or marred the delight which she always felt in the society of . . . relatives and friends."