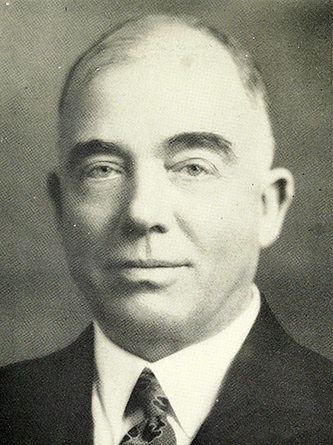 Hight C Moore, clergyman, writer, and editorial executive, was born at Globe, Caldwell County, the son of Patterson and Nancy Ann Moore (first cousins), both of a long line of the Moore family that settled in North Carolina about 1767. He was named for an uncle, Hight C Moore. The "Hight" came from his grandmother's family name, and the "C" (not an initial) was an abbreviation of another family name, most likely "Seay."

Young Moore attended free and subscription schools in Globe Valley (1876–81) and Globe Institute (1882–87). Early in 1888 he entered Wake Forest College, where he was graduated with a bachelor of arts degree in 1890. His studies emphasized English composition and literature, classical courses in Greek and Hebrew, and the English Bible. Following graduation, he served for three months as principal of Cove Creek Academy in Watauga County. On 1 Nov. 1890 he became pastor of the First Baptist Church in Morehead City, the beginning of a succession of North Carolina Baptist pastorates over more than thirteen years, interrupted only by a fall semester (1893) at Rochester Theological Seminary, Rochester, N.Y. He went next to Brown Memorial, Winston-Salem (1893–94); First Baptist Church, Monroe (1894–98); First Baptist Church, New Bern (1898–1903); and University Baptist Church, Chapel Hill (1903–4).

During his years as a pastor, Moore attracted denominational attention by his superior performance in the pulpit and by his facility as a writer. He edited The Evangelist during his pastorate at Monroe and the Atlantic Messenger while he was in New Bern; at the same time, he wrote Sunday school lesson expositions for the Biblical Recorder. Those efforts provided a background for his first professional connection with the North Carolina Baptist State Convention, with headquarters in Raleigh. Moore became state Sunday school secretary in 1904 and served for three years. Afterwards he was field secretary of the Sunday School Board of the Southern Baptist Convention (1907–8), stationed in Raleigh.

Late in 1908 he became editor of the Biblical Recorder, Raleigh, serving until 31 July 1917. Then he went to Nashville, Tenn., as coeditorial secretary and managing editor of all the publications of the Sunday School Board of the Southern Baptist Convention. From 1927 until his retirement in 1943, he was editorial secretary and in that capacity edited more than seventy separate periodicals. On his retirement he established his residence at Ridgecrest, the site of the Ridgecrest Baptist Assembly of the Southern Baptist Convention, which he had helped organize in 1907. He lived at Ridgecrest until his death and was buried in the Ridgecrest Cemetery.

Moore was the recipient of two honorary degrees: doctor of divinity, Wake Forest College (1915); and doctor of literature, Baylor University (1920). He was assistant recording secretary (1898–1907) and statistical secretary (1905–7) of the North Carolina Baptist State Convention, then junior recording secretary (1914–19) and senior recording secretary (1920–46) of the Southern Baptist Convention. In addition, he was an ex officio member and secretary of the executive committee of the Southern Baptist Convention for thirty-two years (1914–46), treasurer of the executive committee and of the convention for four years (1929–33), and chairman of the convention's Committee on Arrangements for more than twenty-five years (1921–46). Moore was a longtime member of the Editorial Section of the International Council on Religious Education (secretary-treasurer, 1924–26) and a member of the Committee on Improved Uniform Lessons (1924–46).

Moore was a prolific writer. His manuscripts and memorabilia, totaling over thirteen thousand items, are in the Southern Baptist Historical Collection in the Dargan-Carver Library, Nashville, Tenn. He was the author of fifty published volumes, three major pamphlets, more than a dozen series of articles in periodicals, and uncounted expository studies of the weekly Sunday School lesson in such publications as the Biblical Recorder, The Teacher, and Kind Words. (A complete bibliography is available in the North Carolina Baptist Collection, Wake Forest University Library, Winston-Salem.)

His first published work was "Seaside Sermons" (1892) and his second was "Select Poetry of North Carolina" (1894). An avid traveler, Moore visited every state in the United States, Canada, Mexico, Europe, Asia, and Africa. Much of his observations appeared in his writings. He was a continuous student of the Bible, and in addition to his weekly commentaries, he wrote thirty-five yearly volumes, entitled, "Points for Emphasis," a pocket-size analysis of the Sunday school lessons for each Sunday in those years (1918–53). In the early days of radio, he gave a broadcast of the weekly lesson over station WSM, Nashville.

On 2 May 1893 Moore married Laura Miller Peterson, a native of Goldsboro. The oldest child of Captain Joseph Eppy and Mary Catherine Parker Peterson, she was educated at Chowan College, Murfreesboro, and the Oxford Female Seminary, Oxford. The Moores had one son, Joseph Peterson, born in Winston-Salem on 3 May 1894.