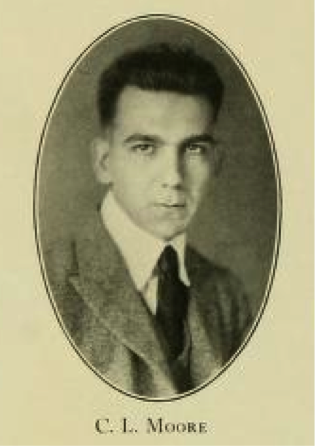 Clifton Leonard Moore, judge, was born in Pender County, the second of six children of William David and Ida Murray Moore. He was raised on a farm and as a boy helped his family with the chores, as did most boys in rural eastern North Carolina.

Moore attended the public schools of Pender County and was graduated from Burgaw High School as valedictorian of his class. In 1922 he received a bachelor of arts degree from The University of North Carolina. While in Chapel Hill, he was named to the Order of the Golden Fleece and the Phi Beta Kappa scholarship society. He was instrumental in founding and was the editor of a literary publication entitled The Prospector, which was an outgrowth of the university's English 21 class to promote creative writing in the South. Moore received his legal education at George Washington University in Washington, D.C., from which he was graduated in 1927.

Moore is best remembered as solicitor for the Eighth Judicial District, a post he assumed in 1943. At the time, the Ku Klux Klan was engaging in numerous illegal activities in Columbus County, one of the counties in Moore's district. Moore successfully prosecuted ninetythree Klansmen and thus ended the terror and intimidation they had inflicted upon the people of that community. At his urging, the legislature enacted the "Moore Act," designed to end secret political and military organizations in the state.

Moore continued as solicitor until 1954, when Governor Luther Hodges appointed him a judge of the superior court. On 2 Feb. 1959 Governor Hodges elevated him to the North Carolina Supreme Court to fill the vacancy created by the death of Justice Jefferson D. Johnson. In 1960 Judge Moore was elected to a full eight-year term on the Supreme Court; he served until his death six years later at North Carolina Memorial Hospital in Chapel Hill.

He also served as mayor of the town of Burgaw, chairman of the Pender County Democratic Executive Committee (1928–38), and member of the Democratic executive committee from the Eighth Judicial District. He was a member of the Burgaw Methodist Church, Rotary International, and King Solomon Lodge No. 138, as well as of the North Carolina and American Bar associations.

Moore married Hazel Swinson of Goldsboro, and the couple had two children: Clifton L., Jr., and Mary Hazel Wilson. A portrait of Judge Moore hangs in the superior courtroom of the Pender County courthouse in Burgaw.

The Dialetic and Philanthropic Literary Societies and The Fraternities of the University of North Carolina. The 1922 Yackety Yack, Vol. 32.  Chapel Hill, NC: 1922. 212. http://library.digitalnc.org/cdm/ref/collection/yearbooks/id/591 (accessed February 12, 2014).