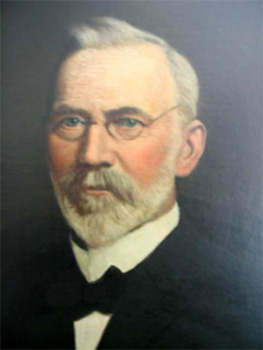 Walter Alexander Montgomery, associate justice of the North Carolina Supreme Court, attorney, and Confederate officer, was born in Warrenton, the son of Thomas Alexander (7 May 1818–3 Nov. 1873) and Darian Dawson Cheek Montgomery (15 Jan. 1823–12 Nov. 1849). His grandfather, William Montgomery, at age twenty-one, emigrated from Northern Ireland to New York City in the late eighteenth century. After working as a merchant and silversmith on Maiden Lane in New York, he moved to Hertford County, N.C., about 1800. William soon settled in Warren County and, on 14 Jan. 1809, married Charlotte Jordan, the daughter of Marcellus and Martha (Nancy Ann) Ward Jordan.

Young Montgomery was only sixteen when he enlisted in 1861 as a private in Company E, First North Carolina Cavalry. A month later he was discharged because of physical disability. Within ten days, on 21 August, he enlisted again, this time in Company A, Second North Carolina Volunteers, which became Company F, Twelfth North Carolina Infantry. He was promoted to sergeant late in 1862 and to second lieutenant on 8 Nov. 1864. Montgomery participated in all of the battles fought by the Army of Northern Virginia—from Hanover Courthouse (1862) to the surrender at Appomattox. He was wounded twice: at Chancellorsville and during the first day's fighting at Gettysburg. On 9 Apr. 1865 he was paroled at Appomattox Court House, Va.

Returning to Warrenton, Montgomery continued his classical studies at the Warrenton Male Academy before studying law under former Attorney General William Eaton, Jr. On 14 Jan. 1867 he received his license to practice in the county court and became county attorney. He was also editor for I. H. Bennett of the Warrenton Courier. On 14 Jan. 1868 he received his superior court license, and during that year he edited a newspaper of his own, called The Living Present. In 1873 Montgomery and his wife went to Memphis, Tenn., where he practiced law until 1876. He then returned to Warrenton and resumed his former practice. In 1893 he moved to Raleigh and practiced until January 1895, when he was elected associate justice of the state supreme court.

Montgomery served as associate justice for ten years. His work and opinions on the bench are contained in twenty-two volumes of the North Carolina Supreme Court Reports, beginning with volume 116. His most eloquent censure of a litigant appears at the end of Bearden v. Fullum (129 N.C. 479). His most celebrated case was Nicholas v. Gladden (117 N.C. 497), which was cited seventeen times in the next eighteen years. After January 1905, when his term expired, Montgomery practiced law in Raleigh and was appointed standing master in the old U.S. Circuit Court for the Eastern District of North Carolina. His opinions were direct and to the point, marked by accuracy, clear reasoning, and absence of the spectacular.

Both Montgomery and his wife were Episcopalians, but after the war, he joined the Baptist church. Judge Montgomery was a Populist. A portrait was presented to the Supreme Court on 30 Oct. 1923, with an address by Thurston T. Hicks. Montgomery died in Raleigh and was buried in Oakwood Cemetery.

Thurston Titus Hicks, Address Presenting a Portrait of Judge Walter A. Montgomery to the Supreme Court of North Carolina at Raleigh, October 30, 1923 (1923).