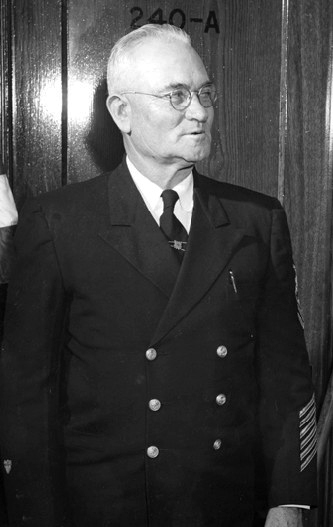 Levene Westcott Midgett, chief boatswain's mate, U.S. Coast Guard, was born at Chicamacomico (now Rodanthe) of English ancestry. His father was Joseph Midgett, a member of the old U.S. Life-Saving Service; his mother was Orenda Sparrow Midgett of Rodanthe. He was the only son among six children.

Levene Midgett began his service career as a surfman at Gull Shoal Station in 1917 and in three years rose to the rank of boatswain's mate, first class. In 1924 he transferred to Chicamacomico Coast Guard Station, rising to the rank of chief boatswain's mate in 1928. That year he was assigned to Bogue Inlet for two months; from Bogue he was transferred to Cape Fear. Reassignment to Oak Island followed, and about one and one-half years later he was sent to Hatteras Inlet Station as officer-in-charge.

While at Hatteras Inlet, on 9 Dec. 1931, Midgett received a radio message that a fishing vessel, the trawler Anna May of Hampton, Va., had gone aground. Crews and a surfboat were launched on the south side of the cape; they proceeded about five miles to sea and made several attempts to get around the shoal, but because of high seas they were forced to return to the beach. The crew then hauled the boat across to the north side of the cape and launched at 2:30 P.M. , going as close as possible to Diamond Shoals, but were unable to see the Anna May. The surfboat returned to the beach at 5:00 P.M. At 6:00 A.M. on 10 December, a second surfboat was launched and proceeded towards Outer Diamond Shoals, where it found the trawler aground. The Hatteras Inlet lifeboat arrived at 7:30 A.M. By 8:30 A.M. , the mast fell and the vessel broke into pieces. After many harrowing attempts, the Cape Hatteras Station lifeboat succeeded in rescuing two men. Midgett and his crew from Hatteras Inlet recovered the three remaining survivors. Coast Guard annals state that "these servicemen effected the rescue at great risk to their own lives, both because of the terrible storm that caused the grounding of the vessel and because of the treacherous shoals." On 17 Dec. 1935 Midgett and his rescue crew, along with the other coastguardsmen who had assisted, were awarded the Silver Lifesaving Medal by the U.S. Treasury Department. Midgett's medal was inscribed with the words: "To Levene W. Midgett for bravely rescuing several men from drowning, Dec. 10, 1931."

In 1933 he transferred from Hatteras Inlet to Creeds Hill for a brief tour of duty and then to temporary duty at the Cedar Point and Portsmouth units of the U.S. Coast Guard on the New England coast. In 1936 he was assigned to Oregon Inlet. After two years, he was assigned to Chicamacomico Station, in his home community of Rodanthe, where he served as officer-in-charge until his retirement on 31 Dec. 1953 with a long list of memorable rescues to his credit.

He championed the use of the DUCK amphibious vehicles in the area. A thirty-seven-foot motor yacht with two men and two women aboard ran aground in a violent wind and rainstorm in Oregon Inlet, fifteen miles north of Chicamacomico, and was in danger of breaking up in the surf. The Coast Guard rushed a motor surfboat and lifeboat to the scene, but neither could get near enough to the grounded vessel to assist because of the shallow water. Midgett and one crew member from his station arrived at the scene in the station's "DUCK," which drove into the surf and saved the yacht and its occupants.

Midgett helped to keep alive the custom of observing "Old Christmas," on 5 January, in Rodanthe—perhaps the only place in the New World where two Christmases are celebrated. Service, duty, heroism, and courage best describe this "Mighty Midgett" of Chicamacomico. He had the ordinary education of others like him on the Outer Banks during the early 1900s. Like the traditional Midgett lifesavers before him, his classroom was the Atlantic Ocean, where he became a self-taught man who was plain, gentle, just, cautious, and resolute. He wore his heritage proudly and with no sign of boastfulness. He would have been the first to josh away as foolishness the idea that he was heroic. Yet his gallant record is inscribed in the archives of the U.S. Coast Guard, a record with a proficiency rating of 3.8 and a conduct rating of 4.0 for his thirty-seven years of service.

On 17 Jan. 1915 he married Lucretia Midgett of Rodanthe. Both were active in the affairs of the Fair Haven Methodist Church in their community. There were three children: Levene, Jr., Mrs. Laura M. Scarborough, and Mrs. Eveln M. Stowe, both daughters having married coastguardsmen. Levene, Jr., served three years in the U.S. Coast Guard prior to his death. Midgett was a member of the Manteo Masonic Lodge, No. 521, and of American Legion Post No. 26; for two years he served as president of the Dare County Wildlife Club. He is remembered for the great celebration on Hatteras Island in September 1952, when the North Carolina State Highway Department completed the paving of the road that linked the seven villages of the Outer Banks and forever ended their isolation. Through his leadership and the efforts of his committee, hundreds of "off-is-landers" rode the converted LST ferries across Oregon Inlet to attend the celebration in the little village of Rodanthe.

Midgett died at age eighty-two in the Veterans Hospital, Hampton, Va. He and his son were buried in the family cemetery at Rodanthe.