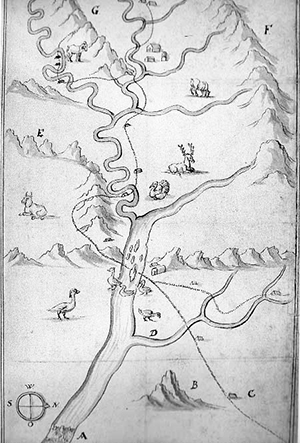 Frantz Ludwig Michel, colonist and explorer, also called Francis Louis Michel, assisted Christoph von Graffenried in establishing a Swiss-German colony at New Bern in 1710. His family, Michel von Schwertschwendi, was prominent in Bern, Switzerland, where his father was a member of the Council and prefect of Gottstatt. Frantz Ludwig seems to have been the older of two sons. His younger brother remained at home in a government career while he undertook military service, probably as an officer in the armies of Louis XIV.

Between 1701 and 1707 Michel made three voyages to America, where he explored parts of Virginia, Maryland, and Pennsylvania. In 1702 he sketched in his journal the first Virginia capitol in Williamsburg and the main building of the College of William and Mary—drawings that proved helpful in documenting twentieth-century restorations. In 1707 he became one of the earliest explorers of the Shenandoah Valley, and he left to posterity a rough map of some principal topographical features.

During one or more of these journeys Michel acted as agent of the government of Bern to seek a tract of land in English America where the canton's paupers (Landsassen or squatters) and its Anabaptists (Wiedertaüfer ), some of whom had been imprisoned for civil disobedience, could be resettled. A company headed by Georg Ritter, a councillor of Bern, was being formed for this purpose. In 1708 Michel was in London. There he met Graffenried and John Lawson, a surveyor who had explored the proprietary province of Carolina.

By 1709 other German-speaking people—refugees from the war-ravaged Palatinate—were pouring into the London area. On 10 May 1710, Graffenried and Michel signed a contract with Georg Ritter and Company under which the two leaders were to resettle about 150 Swiss. They contracted with the British government to resettle some 650 Palatines in the same venture. The colonists were to be guided by Lawson to lands on the Neuse, Trent, and White Oak rivers purchased from the Carolina Lords Proprietors.

Decimated by defections, disease, and Indian uprisings that began in 1711, the project was doomed to failure as a colony, though many of the settlers survived and were assimilated into the English population. Graffenried blamed Michel for allegedly antagonizing the Indians while he was drunk and for leading him to anticipate large revenues from silver deposits Michel said he had found in Virginia and perhaps in Pennsylvania. As financial backing, the colony had only meager Swiss and English transportation funds and vague promises of provisions from the Lords Proprietors.

Michel left no document that speaks in his own defense. But to his credit he forced Graffenried to purchase a small shallop that would bring supplies. In 1712, with the rank of colonel, he led a Swiss-Palatine detachment that joined South Carolina troops in taking the Indian stronghold Fort Nohoroco on Contentnea Creek. A South Carolina account states that he was "much praised . . . on all sides for his skill as an engineer."

Graffenried attempted to transfer the New Bern survivors to land near the Potomac falls in Virginia. However, neither Michel nor the colonists would follow him, and he returned to Switzerland. Meanwhile, in 1714, a group of German miners engaged by the two Swiss made its way overseas and for a few years worked the iron deposits of Lieutenant Governor Alexander Spotswood on the Rapidan River in what is now Orange County, Va. They were the first of many German colonists who settled upland Virginia. The Swiss soldier did not join the mining families in 1714, and here one loses sight of him. Later, without mentioning any date or place, Graffenried added in a marginal notation to his French-language account of the New Bern venture that Michel "died among the Indians." No portrait of Michel is known to exist.