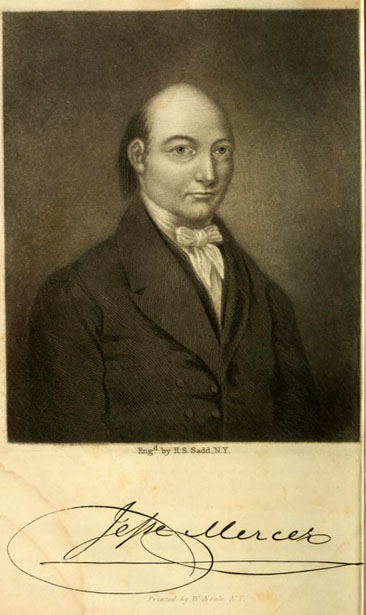 Jesse Mercer, Baptist minister and patron of missions and education, was born in Halifax County, the oldest of eight children of Silas Mercer, an able pioneer preacher in Georgia. His brother Daniel became a distinguished Latin and Greek scholar. Mercer's opportunities of education were limited, though he received instruction from John Springer, a Presbyterian minister and graduate of Princeton, for two years and studied for a year in Salem Academy, a school maintained by his father. On 31 Jan. 1788 Mercer married Sabrina Chivers. Two daughters died in childhood, but the marriage was a happy one, lasting thirty-eight years until Sabrina's death in 1826.

Mercer was ordained to the ministry by his father and Sanders Walker on 7 Nov. 1789. His first pastorate was at Hutton's Fork (now Sardis). Following the death of his father in 1796, he became principal of Salem Academy and added to his ministry three of his father's churches, Phillips' Mill, Wheatley's Mill (later Bethesda), and Powelton, which he served for thirty-nine, thirty-two, and twenty-eight years respectively. Powelton became the center for the early activities of Georgia Baptists. A conference there in 1801 laid the foundation for missionary undertakings among the Creek Indians, and conferences in 1802 and 1803 established the general committee of Georgia Baptists for itinerant preaching and missionary work. In 1822 the Georgia Baptist Convention was organized in the Powelton Church, where it met seven times during the first eleven years of its existence. Mercer was president of the convention from its founding until his death.

As leader of the Georgia Baptists, Mercer played the principal role in the founding of Mercer University and in the purchase of the Christian Index, which he published for seven years. He also published Cluster of Spiritual Songs, revised several times, this work has been regarded as "a worthy contribution to American hymnology." Mercer was the author of A History of the Georgia Baptist Association [Convention] (1838).

In 1827 he moved to Washington, Ga., where he founded the First Baptist Church, which he served for the rest of his life. In December 1827 he married Mrs. Nancy Simons, of Wilkes County, the widow of Captain Abraham Simons, who had left her a large estate. Mercer outlived his wife by four months and carried out their mutual decision to leave everything to religious causes, with Mercer University as the principal beneficiary. He died in Butts County, Ga., and was buried at Penfield, the first location of Mercer University.

Mercer, Jesse, and Cyrus White. 1830. Ten letters addressed to the Rev. Cyrus White: in reference to his scriptural view of the atonement. Washington, Wilkes County, Ga: Printed at the News Office.