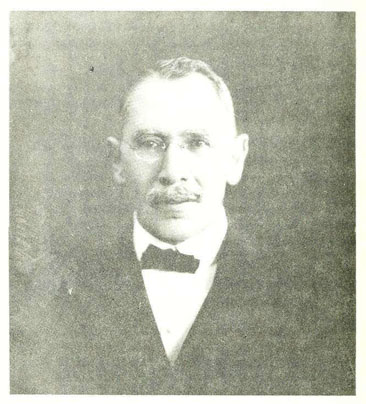 Samuel Mendelsohn, rabbi and scholar, was born in Russia, the son of S. Feiwel and Jetta M. Mendelsohn. He studied in Vilna, Russia, and Berlin before coming to the United States in 1868. In 1870 Mendelsohn began two years of study at America's first Jewish theological seminary, Maimonides College of Philadelphia. In 1873 he became the rabbi of Congregation Beth El of Norfolk, Va., and in 1876 he was appointed rabbi to North Carolina's first permanent Jewish congregation, Temple of Israel in Wilmington. The only previous attempt to start a synagogue in the state was in Wilmington in 1867, but the group had folded within five years.

In Philadelphia Mendelsohn studied with the renowned American Jewish scholars, the Reverend Isaac Leeser and the Reverend Sabato Morais, although his favorite was Dr. Marcus Jastrow. After two years Mendelsohn and fellow student, David Levy, began publishing a weekly Jewish religious, political, and community journal, The Jewish Index, in an attempt to fill the void created by the discontinuance in 1869 of the noted Philadelphia-based Jewish periodical, The Occident. This ambitious project lasted only a few months, with Mendelsohn leaving for Norfolk and his first pulpit. Three years later, in February 1876, he was appointed rabbi of the Wilmington congregation, and on 12 May he officiated at the dedication of North Carolina's first synagogue. In 1879 Mendelsohn married Esther Jastrow, the niece of his former teacher, and in 1880 their only child, Charles, was born.

Rabbi Mendelsohn's career in Wilmington was highlighted by examples of scholarship, community participation, and involvement in state and national fraternal organizations. His book, Criminal Jurisprudence of the Ancient Hebrews (1891), compiled material from Talmudic and other rabbinical writings and compared the ancient Hebrew system of laws and justice to that of ancient Rome and to England prior to 1800. The work described Israel's Talmudic laws as mild, fair, and highly humanitarian in contrast to the other systems discussed. Mendelsohn stressed the rarity of capital punishment and the early abolition of the "eye for an eye" ethic. In 1915 he contributed an article, "The Arterial Function and the Circulation in Ancient Rabinnical Literature," to the Charlotte Medical Journal, in which he pointed out that early Jews were aware of the function of the arteries fourteen centuries before William Harvey's "discovery." Mendelsohn also was responsible for the translation of the Book of Haggai for the Jewish Publications Society in America. He compiled the index of biblical citations for the Jastrow Talmudic Dictionary and wrote numerous articles for the Jewish Encyclopedia (1901–6), Revue des Etudes Juives, published in Paris, and the American Jewish secular press.

Mendelsohn held office in such organizations as the Fraternal Mystic Circle, the Masonic group Royal Arcanum, the Odd Fellows, and the Independent B'nai B'rith. He was grand ruler of Jurisdiction No. 9 and supreme representative-at-large of the Fraternal Mystic Circle; secretary for thirty-five years of the Cornelius Harnett Lodge of the Royal Arcanum as well as grand chaplain for North Carolina, statewide recruiter, and lodge regent; president of the North State Lodge of B'nai B'rith; and supreme president of the U.S. Benevolent Fraternity. Mendelsohn was active in the community as the director of the Associated Charities of Wilmington, and he often preached in local Christian churches, including those composed of black members. In 1883 he received an honorary doctor of laws degree from The University of North Carolina. He served as the rabbi of the Temple of Israel until his death.

Mendelsohn, Samuel. The criminal jurisprudence of the ancient Hebrews; compiled from the Talmud and other Rabbinical writings, and compared with Roman and English penal jurisprudence. Baltimore : M.Curlander. 1891. https://archive.org/details/criminaljurispru00mend (accessed August 29, 2014).