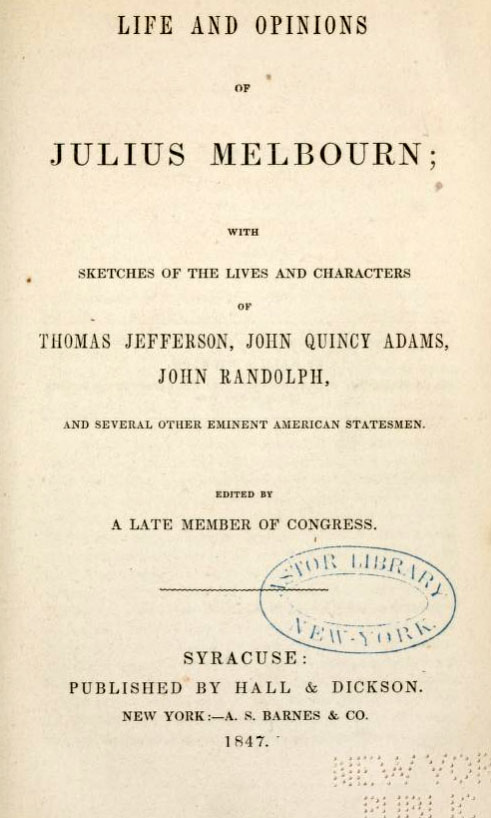 Julius Melbourn, said to have been born on 4 July 1790 in Wake County, was apparently a fictitious character invented to perpetrate a literary hoax. In 1847 the firm of Hall and Dickson in Syracuse, N.Y., published the purported autobiography of a former slave, entitled Life and Opinions of Julius Melbourn. Advertised as having been edited by "a late member of Congress," the narrative was said to have been written by a blue-eyed mulatto whose master had been a Major Johnson, owner of a Wake County plantation about ten miles from Raleigh. At age five the slave was purchased by the wealthy widow of an English naval lieutenant, a Mrs. Melbourn, who for some reason had moved to Raleigh, even though it was then a village less than three years old. The narrative states that she emancipated Julius, gave him her name, educated him in her late husband's extensive library, and left him a sizable inheritance at her death in 1809.

After an incredible series of dramatic intrigues involving a wife and son, separation and eventual reunion, the hero was said to have lived in New Orleans and New England before finally moving to England to escape racial prejudice, termed by the writer "greater in the Northern, particularly in the New England free states, than in the Southern slaveholding states." The "autobiographical" section of the book comprises approximately one-fourth of its pages, the remaining three-quarters consisting of his "opinions" on a variety of social and political subjects, including the American Colonization Society and his "reminiscences" of conversations with such persons as John Marshall, John Quincy Adams, and Thomas Jefferson, at least one such encounter having taken place at Monticello.

Soon after the book's appearance and review in northern newspapers, the Raleigh Register engaged in a lively exchange with the Albany (N.Y.) Journal, the Washington Era, and the Richmond Whig concerning its authenticity. The narrator had mentioned a Mr. Gale [sic ], whom, if intended to represent the founder of the Register, Joseph Gales, he had mistakenly placed in Raleigh four years before the actual Joseph Gales arrived. His son Weston R. Gales, editor of the Register in 1847, expressed the absolute conviction that Melbourn never existed—at least not in the Raleigh area. After consulting "the oldest inhabitant" and numerous other Wake County citizens, Gales stated emphatically that the book was "sheer fabrication from beginning to end, unless fictitious names have been resorted to, in place of real ones." These names included the Major Johnson who was Melbourn's master but "whose Christian name [he was] unable to give"; Johnson's son George, who speculated in Negroes; the narrator's benefactor, Mrs. Melbourn, whose given name he never listed; her son Edward; the slave Maria whom the hero married and tried to purchase; their son J———;a slave broker named Return Jonathan Fairport who went to Raleigh from Lynn, Mass.; a Colonel Boyd and his daughter Laura, who married one Alexander St. John from Norfolk, Va.; a Methodist minister from Virginia called Mr. Smith; and a Raleigh lawyer named Mr. Grip.

In 1928 Professor Vernon Loggins of Columbia University, doubting the genuineness of the book, wrote to Vitruvius Royster, clerk of Wake County Superior Court, seeking emancipation documents or any other information that might verify details given as biographical facts. Neither the county records at that time nor subsequent research by the writer of the present sketch supports authenticity of any one of the names or facts in the book, with the possible exception of "Mr. Gale." Apparently unaware of the searches made in 1847 and in 1928 for proof, at least two twentieth-century historians have mentioned Melbourn as though he actually existed.