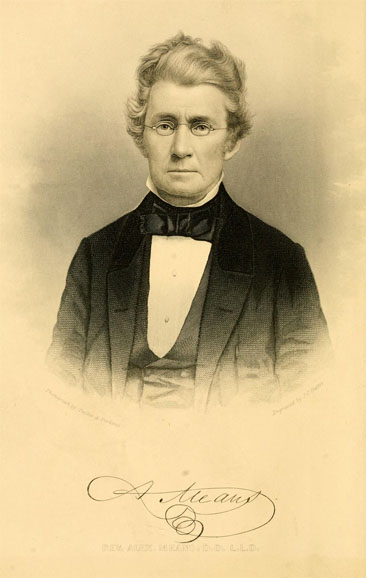 Alexander Means, Methodist clergyman, physician, scientist, and teacher, was born in Statesville, the son of Alexander (1767–1845), a tailor from County Tyrone, Ireland, and Sarah McClelland White Means, the widow of James White and a native of Pennsylvania. Initially educated in the Statesville Academy taught by the Reverend John Mushat, young Means became a teacher himself at an early age, conducting a school apparently at Mock's Old Field in Rowan County, the site of the future Mocksville in Davie County. His own poor health and the death of his mother in 1821 led him to move to Georgia, where friends assisted him in finding a school in Greensboro. After a year in the schoolroom, he went to Madison to teach and study medicine. In 1825 he left Madison to study medicine at Transylvania College in Lexington, Ky. Following a single session there he began a practice in Hearnville, Putnam County, Ga., and soon afterwards at Covington.

In the same year that he went to Kentucky, Means joined the Methodist Episcopal church; three years later he was licensed to preach. As opportunity offered, in the face of his other commitments, Means continued to preach for the rest of his life. As a clergyman he took part in a great revival in Atlanta in 1847; in 1850 he was invited to deliver a memorial sermon in Philadelphia on the death of President Zachary Taylor; and, as a close friend, he preached a funeral sermon in 1874 memorializing President Millard Fillmore.

While a physician in Covington, Ga., Means began to study chemistry, and when the Methodists established the Georgia Conference Manual Labor School there in 1834, he became its head. He left after four years to join the faculty of Emory College in Oxford, Ga., when it opened in 1838. To prepare himself for his new duties as professor of natural science, he undertook special study during the winter of 1838–39 at Pennsylvania College and at Jefferson Medical College in Philadelphia. During his eighteen years at Emory, Means also served as professor of chemistry at the Medical College in Augusta, where he taught during the winter for nineteen years. For reasons of health as well as to conduct some scientific research, Means was in England in 1851. There he met the natural philosopher, Sir Michael Faraday, discoverer of magneto-electricity as well as other features of electricity, and the geologist, Sir Charles Lyell. When Lyell visited America, Means had occasion to act as his host. Perhaps inspired by his contact with Faraday, Means returned home to begin his own experiments with electricity; he has been credited with anticipating the phonograph, the electric motor, and electric lights. In 1857, in Atlanta, he told an audience that he believed it was through the use of electricity that Moses parted the Red Sea. Some of the apparatus that he used in his experiments is preserved at Oxford College.

In 1853, while continuing to teach at Emory and Augusta, Means became president of the Masonic Female College in Covington, but after one year he resigned to become president of Emory College. Retaining that position for only a year, he concluded that he did not care for administrative work and returned to the classroom as professor of natural science; he also taught geology and biblical literature. Still conducting his classes at Emory and Augusta, he became professor of chemistry at the recently established Atlanta Medical College, where he taught in the summer from 1854 to 1868.

Although holding strong Southern points of view, Dr. Means rejected secession as a solution to sectional differences until the very last. As a member of the Georgia Secession Convention, however, he voted to leave the Union. Ending his affiliation with both Emory and Augusta, he was an inspector of munitions during the Civil War. In 1868 he also resigned his post at Atlanta Medical College to become examining chemist for the state, a position he filled until 1877.

Means was the author of numerous published sermons, tracts, and pamphlets on a variety of subjects. A "gentleman poet," he also wrote A Cluster of Poems: For the Home and the Heart (1878). He received honorary degrees from the University of Middletown in Connecticut, the Medical College of Georgia, and Emory College. There are portraits of him at Emory University and at Oxford College.

Notes by W. N. Watt (Taylorsville) culled from wills, deeds, and other records in the Iredell County Courthouse, Statesville (in possession of William S. Powell).