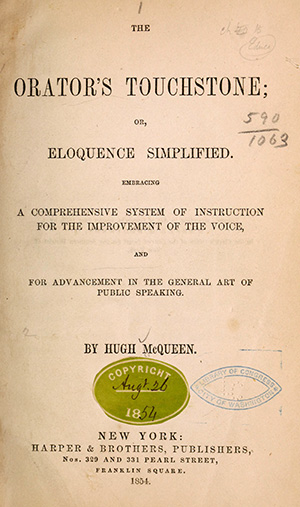 Hugh McQueen, orator and politician, was the oldest son of Murdo (Murdoch) McQueen of Chatham County. His father had come to North Carolina from Scotland in 1795, bringing with him a colony of Scots. In the same year Murdo purchased a thousand acres in lower Chatham County between the Deep River and the Brooks and Petty creeks, where young Hugh was born and raised. He had a number of brothers and sisters, but the name of their mother is unknown.

McQueen received his early education at home, achieving enough academic proficiency to enter The University of North Carolina in 1818. During his single year at the university, he became a member of the Philanthropic Society and achieved recognition as an orator. He was present at the commencement of 1822 but did not receive a degree. In 1829 he entered the North Carolina House of Commons as a representative from Chatham County; he also served in 1831 and 1832. In 1834 he won a seat in the state senate, serving in 1834 and 1835. He was a trustee of The University of North Carolina from 1833 to 1845.

At the 1835 constitutional convention in North Carolina, McQueen was a challenging figure. His brilliant oratory stressed the need for education and for constitutional provisions that would result in the economic stability necessary for the growth of schools. The educational reforms he proposed were gradually adopted in future years.

McQueen moved to Chapel Hill from Chatham County in 1835 and in 1836 published his first newspaper, the Columbian Repository. It survived only a few weeks, but this did not discourage McQueen, who later became the editor of the Chapel Hill Emerald and of the Raleigh Star for brief periods. While editor of the Star in 1839, he moved to Wake County and remained there until he left the state.

Between 1839 and 1842, McQueen reached his peak of achievement in North Carolina. In Chapel Hill the Philanthropic Society called upon him to deliver the alumni address at the commencement of 1839. Recently there had been unrest in the Dialectic Society, and in his remarks McQueen urged the students to stand by the university as well as the Dialectic and Philanthropic societies. This speech, presented in Gerrard Hall on 26 June 1839, the evening preceding graduation, was so well received by alumni and the graduating class that it was printed in August 1839 by the Raleigh Register at the request of the Philanthropic Society.

In 1840 McQueen became the attorney general of North Carolina. He held this position until, for unknown reasons, he resigned and moved to Texas in 1842. Later, he earned distinction with the publication of his book, The Orator's Touchstone, by Harper Brothers of New York in 1854.

According to the LaGrange (Tex.) Paper, for 7 Apr. 1855, Hugh McQueen had died a few days earlier. He was buried in the public graveyard in LaGrange. The paper noted that McQueen had been a member of the Galveston and LaGrange bar associations. The myths about his heroism in the Texas rebellion and his death under Sam Houston are all unfounded. He was never known to marry, and no descendants can be found.

McQueen, Hugh. An address delivered before the alumni and graduating class of the University of North Carolina : on the afternoon preceding commencement day, in Gerard Hall, June 26, 1839. Raleigh : Printed at the office of the Raleigh Register. 1839. https://archive.org/details/addressdelivered00mcqu (accessed November 21, 2013).

[Title page]. The orator's touchstone; or, Eloquence simplified. Embracing a comprehensive system of instruction for the improvement of the voice, and for advancement in the general art of public speaking. New York, Harper. 1854. https://archive.org/details/oratorstouchston00mcqu (accessed November 21, 2013).