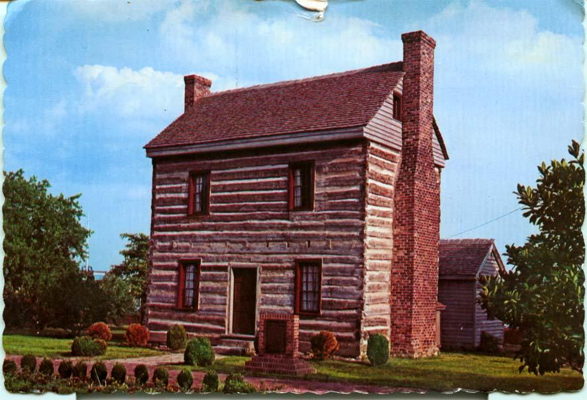 John McNairy, noted as the man who gave Andrew Jackson the opportunity that led to the presidency, was born on Horsepen Creek, near what in 1771 became the Guilford County seat at Martinsville, a town now extinct. He was the first of nine children of Francis and Mary Boyd McNairy, who moved to North Carolina immediately after their marriage in Lancaster County, Pa., on 27 Apr. 1761. The couple purchased from Herman Husband a tract on Horsepen Creek, later famous as part of the scene of the Battle of Guilford Court House (15 Mar. 1781) during the American Revolution. North Carolina State Records show payment to one John McNairy for services rendered, but no details of his war service remain. The McNairy house was used as a hospital after the battle.

McNairy received a liberal education for that day at the school of the Presbyterian minister, David Caldwell, to whose church the family belonged. He also read law, probably under the direction of his neighbor, Governor Alexander Martin, and in 1783 received a license to practice, thus becoming the first native-born lawyer in Guilford County. In 1784 he moved to Salisbury for two years, studying further under Judge Spruce Macay. Here began a lifelong intimacy with a fellow student, Andrew Jackson. The two spent the winter of 1787–88 in the McNairy home, riding circuit with the court and gaining experience in legal affairs. In December 1787 the state of North Carolina appointed McNairy as judge of the newly planned Mero District in Davidson County (now in Tennessee). With Jackson and another friend, Thomas Searcy, he began the journey to Nashville early in 1788, joining at Morganton a party that included the family of General William Lee Davidson for the Indian-haunted overmountain trip.

There being no court organization in Davidson County, on first declaring the Superior Court of Law and Equity in session, on 4 Nov. 1788, Judge McNairy appointed Andrew Jackson attorney general, an appointment ratified by the North Carolina legislature in June 1789. That year the Mero District was ceded to the federal government, and President George Washington named McNairy as one of the three federal judges who, with Governor William Blount, ruled it from Nashville, where McNairy had settled. In 1796, when the district became the state of Tennessee, McNairy, with Jackson, was a delegate to the constitutional convention. In 1797 he was reaffirmed by the new state as superior court judge. In less than a year, he received a second appointment from President Washington as federal judge of Tennessee.

A rift began in 1788 between McNairy and Jackson that lasted many years. McNairy's judicial temperament and Jackson's impulsiveness caused a number of differences of opinion in the business of organizing the new state, as well as in personal affairs, and the close friendship ceased, though they continued public service together in developing the state. During the slanderous campaign of 1828, McNairy rallied to Jackson's support and served on what was known as the Whitewashing Committee. He wrote: "You and myself began life together and time rolls on apace. We shall soon cease to act. Until then and after, may you be happy." Jackson answered that they should forget their differences, remembering only their youthful friendship. The judge resigned his long-held office on 29 May 1833, and the president accepted the resignation of his old friend.

While most of his life was spent in his judicial capacity, McNairy exerted a great influence over the early growth of Tennessee. A large landowner, businessman, and respected citizen, he was active in the social, cultural, and educational development of the state, and in the expansion of its natural resources. McNairy County was named for him. He was president of the State Bank of Tennessee and a trustee of the Nashville Bible Society, of which Jackson was vice-president. He was a trustee of Davidson Academy and of the school resulting from its merger with the Federal Seminary. Throughout his life, he gave much time and thought to the development of educational facilities. Childless, he educated several nieces and nephews. About 1790 all of his family moved to Tennessee, with the exception of James, who remained a lawyer in Guilford County. Margaret married Thomas Hamilton, Catherine married Jason Thompson, and Mary married Elisha Nicholson. Robert settled in Giles County. Nathaniel and Andrew were lawyers. Boyd, a noted physician, is remembered as host of Lafayette on his visit to Nashville in 1825.

Either in 1788 or 1789, Judge McNairy married Mary Bell Hunt Robertson (Mrs. Mark Robertson), twice widowed by Indian raids. His funeral was attended by members of the General Assembly of Tennessee and many other prominent citizens. His remains were placed in an impressive family vault in Nashville City Cemetery which bears this inscription: "John McNairy, appointed first Judge of the Mero District of N.C. (Nashville) in 1787. Later Judge of Tennessee Supreme Court and U.S. District and Circuit Courts. Schoolmate and friend of Andrew Jackson."