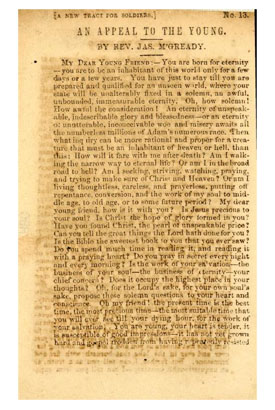 James McGready, clergyman and evangelist, born in Guilford County, was the son of James and Jean McGready, who had immigrated to America from Ireland. He had one sister, Hannah, and six brothers: Samuel Rutherford, Judah, Aaron, Moses, David, and Israel. The respect of the parents for the Scriptures is indicated in the names of the children, who were reared in the strict Calvinist tradition as members of the Buffalo Presbyterian Church. As a child, James displayed an unusually pious attitude towards religion, and this increased as he grew older. This trait so impressed a visiting uncle that he took the youth to his Pennsylvania home to be educated for the ministry. In that state, McGready first enrolled in a school conducted by Joseph Smith, a Presbyterian minister. Later he attended an institution directed by another Presbyterian clergyman, John McMillan, which eventually became Cannonsburg College. On 13 Aug. 1788 McGready was licensed by the Redstone Presbytery and began his ministerial career. En route to North Carolina the following year, he visited Hampden-Sydney College where he was impressed by the pietistic evangelism of the Reverend John Blair Smith and determined to conduct his ministry along similar lines.

In 1793 McGready was ordained by the Orange Presbytery and assigned to the pastorates of the Stony Creek and Haw River Presbyterian churches. The following year he married Nancy Thompson, whom he had met in Pennsylvania, and settled near High Rock, N.C. The minister then applied himself zealously to the emphasis of Christian piety among his congregations. On one occasion he created a sensation when he refused to ask the blessing of a meal after a funeral because of the excessive amount of whiskey that was being consumed. In 1796 his pulpit was removed from the Stony Creek church and burned, and a message written in blood was sent to him threatening physical violence unless he changed his preaching emphasis.

In the same year, discouraged by a sense of failure, McGready decided his ministry would be more useful on the frontier. Moving to Logan County, Ky., he took charge of the congregations at Muddy River, Red River, and Gasper River. He was followed west by William Hodge, Barton Warren Stone, John Rankin, and John and William McGee. The evangelistic fervor of these zealots led to the introduction of camp meetings, which provided the opportunity for a series of services. The zeal of the church meetings was intensified by the outbreak of strange physical demonstrations on the part of individuals in the congregations. These phenomena became known as "Exercises," or sometimes as "the jerks," and as they accelerated, the entire southwestern frontier came under the influence of the Great Revival of 1800. Within a year, the revival spread into North Carolina and other southern states. This event is credited with having set the religious pattern for the South and the Southwest during the nineteenth and part of the twentieth centuries.

To supply the demand for clerical leadership caused by the rapidly increasing number of converts made during the revival, McGready and his associates in the Transylvania Presbytery licensed as exhorters young men who had acquired only a small amount of educational training. The Synod of Kentucky disapproved of this action and, after considerable debate, suspended McGready, Hodge, Stone, and others from the Presbyterian ministry in 1806 and 1807. The result was the formation of the Cumberland Presbytery, which eventually became the keystone of the Cumberland Presbyterian Church. In 1809, the dissension having subsided somewhat, Hodge was restored to the fellowship of the Transylvania organization and McGready was reinstated the following year. Stone, however, did not return but founded a church that eventually became the Disciples of Christ. Shortly after this event, McGready moved to Henderson County, Ky., undertaking occasional missionary tours through Ohio and Indiana until his death. His burial place is unknown.

McGready was known for his fiery and emotional sermons, which depicted in detail the glories of heaven and the furies of hell. His personality as a "Son of Thunder" was dynamic and he was responsible for the decisions of both Barton Warren Stone and William Hodge to enter the Christian ministry. His interest was Christian piety and evangelism rather than denominational creeds and theology. A number of his homilies were preserved by W. W. Worsley, a publisher in Louisville, Ky., in The Posthumous Works of the Reverend and Pious James M'Gready (2 vols., 1831–33), edited by the Reverend James Smith. This work also contains an account of the Great Revival penned by McGready during his lifetime.

No portrait has been found, but McGready was described by Barton Warren Stone as follows: "His person was not prepossessing, nor his appearance interesting, except his remarkable gravity, and small piercing eyes. His coarse tremulous voice excited in me the idea of something unearthly. His gestures were sui generis, the perfect reversion of elegance. Everything appeared by him forgotten, but the salvation of souls. Such earnestness—such zeal—such powerful persuasion, enforced by the joys of heaven and miseries of hell, I had never witnessed before."

Elder John Rogers, ed., The Biography of Elder Barton Warren Stone, Written by Himself, with Additions and Reflections (1847).