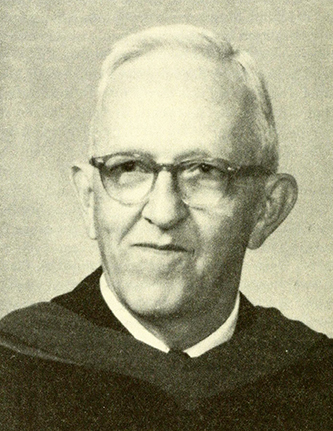 Neill Roderick McGeachy, clergyman, church historian, and author, was born in Lenoir, the son of the Reverend Daniel Patrick and Lila Peck English McGeachy. Educated at Greenbrier Military School in Lewisburg, W. Va., and the public schools of Decatur, Ga., he was graduated from Davidson College in 1930 and served as headmaster of the American Mission School in Omdurman, the Sudan, from 1930 to 1932. In 1935 he received a bachelor of divinity degree from Union Theological Seminary, in Richmond, Va., which also awarded him a master of theology degree in 1954. Ordained in 1935, he was pastor of Presbyterian churches in Selma (1935–37), Spencer (1937–41), Charlotte (Sugaw Creek) (1941–45), and Statesville (1945–70).

Long interested in history, McGeachy led the Mecklenburg Presbytery in 1943 in celebrating the three hundredth anniversary of the Westminster Assembly. In 1952 he preached at the centennial observance of the Presbyterian church in Lenoir, and the following year in Statesville he celebrated the two hundredth anniversary of the founding of Fourth Creek Congregation. He participated in pageants depicting the history of the Presbyterian church and played the part of the Reverend Alexander Craighead at anniversaries in both North Carolina (1943) and Pennsylvania (1952). McGeachy served on a committee that planned the centennial of the Presbyterian church in the United States in 1960, and in 1962 he was elected chairman of the synod's committee on historical matters. In 1963 he was instrumental in having a film made depicting the history of the Synod of North Carolina.

In connection with the bicentennial of his former church in Charlotte, McGeachy was the author of A History of Sugaw Creek Presbyterian Church (1954), and he was invited back to preach at the anniversary observance. In 1964 he published A History of Old Fourth Creek Congregation. In 1970 he was named chairman of the special committee for the celebration of the 175th anniversary of the Concord Presbytery, and he was commissioned to write its history. This work was completed in 1979 and published in 1985 as Confronted by Challenge: A History of the Presbytery of Concord, 1795–1973. When several presbyteries in Piedmont North Carolina were making plans to unite, McGeachy in 1971 prepared a paper, "1741 vs. 1971," that was widely circulated and used by those responsible for making the decision about the union. He also was a contributor to the Dictionary of North Carolina Biography.