John Harvey McElwee, industrialist and father of the Statesville tobacco industry, was born in York County, S.C., the son of Jonathan Newman and Martha Orr McElwee. He attended the rural schools of York County and later the military academy at York. At the beginning of the Civil War he was engaged in a mercantile business in Columbia, S.C., that later was burned by General William T. Sherman's army. He joined the Confederate army from Columbia and was given the task of collecting supplies for the armies in Virginia.

McElwee's work brought him to Statesville, N.C., where he met and married, on 8 Sept. 1862, Marian Victoria Alexander. Victoria was born and educated in Mississippi, but her mother was part of the pioneer Simonton clan of Iredell County, and in 1862 she and her mother had moved back to the old William Simonton home place just east of Statesville. 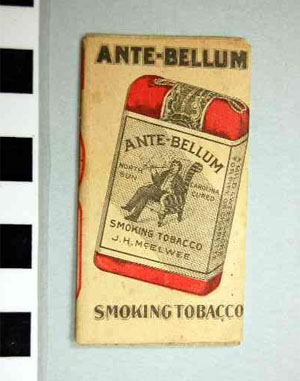 After the war, perhaps as early as 1865, McElwee formed a partnership with T. A. Burke for the manufacture of tobacco at Elmwood on the Western North Carolina Railroad, producing a brand of smoking tobacco known as Yellow Rose, which took premiums at several fairs. In 1870 he moved into Statesville and began manufacturing tobacco there. Soon he was advertising a brand he labeled as "Ante-Bellum Durham Tobacco, genuine Durham tobacco, manufactured in Statesville," using the Durham "bull" as a trademark. According to family tradition, he had been influenced to go into the tobacco business by J. R. Green, who was then manufacturing a smoking tobacco known as Durham's at a little crossroads on the North Carolina Railroad between Hillsborough and Raleigh. While Green and McElwee were discussing the possibilities of the tobacco culture, the McElwee story goes, the bellowing of a nearby bull suggested to them a name for their tobacco and they subsequently agreed to use the bull as a trademark. Green's venture had a stroke of rare luck. General Joseph Johnston surrendered his Confederate army to General Sherman a few miles from Green's, and soldiers of both sides broke into the factory and appropriated tobacco bearing the bull trademark. As a result, such tobacco came to be in great demand, and orders for more of it poured in from all over the country.

Green's successor in Durham, W. T. Blackwell and Company, objected to McElwee's use of the bull as a trademark and the name Durham, leading to lawsuit after lawsuit and countersuits over a twelve-year period and in half a dozen counties. Finally, in 1888, McElwee was compelled to give them up, but not before he had forced Blackwell to make the bull more decent by putting a fence in front of him.

John H. McElwee was the first of many small tobacco manufacturers in Statesville and was in the lead in establishing tobacco markets there. Just before World War I his "Planter's Warehouse," opposite his home on Water Street, was very active. In addition to the Yellow Rose and Antebellum smoking tobaccos, he manufactured a third brand, Indian Girl, more popular and better known than the others, whose trademark was a picture of a well-known Indian princess of the day. He also produced several brands of chewing tobacco.

The McElwees had three daughters and four sons. One daughter, Mamie, was prominent in the work of the Presbyterian church; another married S. S. Thomas, and the third became the wife of W. E. Selby. His oldest son, William Henry, was a lumberman; the youngest, Ross, was a longtime physician in Iredell County. The other two sons, Thomas N. and John N., carried on the tobacco business. During the 1920s they attempted to manufacture cigarettes but were unable to compete with the established companies. By the time of the depression, the tobacco industry in Statesville had disappeared. The McElwees were also involved in the manufacture of furniture, establishing the Carolina Parlor Furniture Company in 1919 and after World War II the Ross Furniture Company, named for Dr. Ross McElwee.

On 4 July 1920, John Harvey McElwee became paralyzed; after nearly six years, he died at his home on Water Street in Statesville and was buried in Oakwood Cemetery.