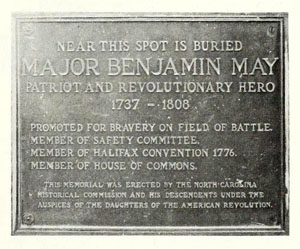 Benjamin May, Revolutionary War officer, landowner, farmer, and saddler, was born in Scotland. Around 1750 he moved to North Carolina and settled on the south side of Contentnea Creek, two miles west of what is now the Pitt County town of Farmville. Pitt County deeds show that, beginning in 1763, May purchased thousands of acres of land and a large number of slaves. He was a farmer, and several property deeds identify him as a saddler.

By 1773 May was serving as a captain in the Pitt County militia. In 1774 the colonial Assembly appointed him one of five commissioners responsible for the transfer of the county courthouse, prison, and stocks from a private citizen's land to the newly established town of Martinsborough. In the same year, May was elected by his fellow freeholders to the Pitt County Committee of Safety. Active in that committee throughout 1775, he joined eighty-seven other citizens in signing a committee resolution that acknowledged the sovereignty of England's King George III but deplored the repressive acts of the British government and supported the Continental Congress. At the July meeting where this resolution was approved, companies of patrollers were organized and authorized to disarm and punish Negro slaves found off their masters' premises without permission. May was assigned to the Fifteenth Company of patrollers and soon became one of its captains.

May continued to serve on the Committee of Safety during 1776. In May he and James Gorham were directed by the Provincial Congress at Halifax to acquire arms for Pitt County troops. On 19 Nov. 1776 May took his seat at Halifax as one of five Pitt County delegates to the Provincial Congress. This session of the congress wrote the constitution by which the fledgling state of North Carolina was to be governed.

In 1779 May was made a field officer with the rank of first major in the Pitt County militia. He may have been among the Pitt County soldiers who fought in the Battle of Guilford Court House in March 1781. In 1782 he was serving as a justice of the peace, a post he resigned in late 1784. Two years later he was among thirteen prominent North Carolinians named trustees of Pitt Academy, established by the state legislature in an act that also changed the name of Martinsborough, the site of the academy, to Greenesville (now Greenville). In 1804 May won a seat in the North Carolina House of Commons, where he represented Pitt County until his death.

May married Mary Tyson in 1765. They had at least ten children: Benjamin, Jr., Fannie, Patsey, Sallie, Elizabeth, Delitha, Mary (Polly), Clara, James, and William. Another son, John, is mentioned in May's will, but nothing more is known of this eleventh child. Mary Tyson May died in 1800, and by 1805 May had married a woman named Anna. After her death, he contemplated marriage to a woman with property and children of her own and proposed an agreement whereby each spouse would independently control his or her property. However, the agreement's complicated language excited the lady's mistrust, and the wedding was canceled.

May was buried in the family cemetery near Farmville. Not far from the cemetery is a monument that was erected in 1925 under the auspices of the Daughters of the American Revolution to commemorate the major's Revolutionary War service. The DAR also designated its Farmville branch the Major Benjamin May Chapter.