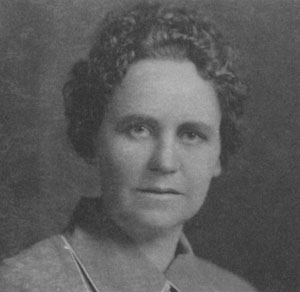 Sallie Belle Marks, first woman professor at The University of North Carolina, was born in Albemarle, the daughter of Whitson A. and Arana Hall Marks. She attended Meridian Female College, Meridian, Miss., in 1908 and was graduated from Southwestern Teachers College in 1923. Her professional career began when she taught in junior high school in Oklahoma in 1916–17, followed by service as principal of an elementary school in Fort Smith, Ark., and as assistant superintendent of schools in La Crosse, Wis. She received a master of arts degree from Columbia University in 1926. Having also begun courses at George Washington University towards a Ph.D., she taught at the University of Arkansas from 1924 to 1927, finishing her doctorate at Columbia some years later.

For the term 1927–28 Miss Marks was supervising principal of the elementary grades of the training school at The University of North Carolina with the rank of assistant professor of education, thus becoming the first female professor on the faculty at Chapel Hill. Her title soon became assistant professor of elementary education, a position she held until 1934. She was cocontributor of "The Geography of North Carolina" to a textbook, Geography: Southern Lands , published in 1933.

From 1934 to 1936 she was professor of education and psychology at Salem College, and from 1936 to 1938 she taught at Meredith College, Raleigh. For the six years between 1938 to 1944 she held a professorship at the University of Chicago. In the latter year she became an educational specialist in the Institute of Inter-American Affairs in Washington, D.C., working in a number of foreign countries until 1954. Miss Marks was decorated by the government of Peru for her contribution to that nation's reading program. She was a member of the American Education Team in Korea in 1954–55, holding the rank of lieutenant colonel with the army. She was coauthor of Building Our Hemisphere , published by Scribner's in 1957.

Following her retirement Sallie Marks spent part of each year in Black Mountain while continuing to maintain her home in Washington, where she was active in the World Organization for Early Childhood Education, the Society of Women Geographers, the Children's Book Guild, and other organizations. She was buried in the Albemarle cemetery.