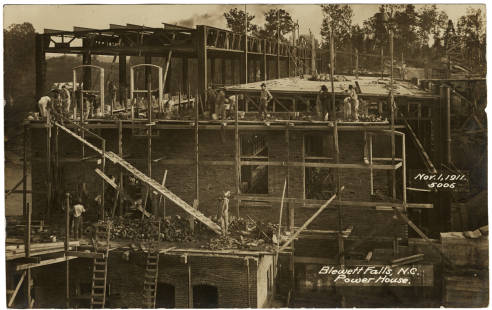 Frederick (Frank) Marchant, photographer, was born in Pennsylvania, one of three children of William J. and Henrietta (Hattie) S. Makeley Marchant. His father (b. ca. 1835) and his paternal grandparents were natives of Massachusetts. His mother, also born in Massachusetts, was the daughter of Irish immigrants.

The family was living in Pennsylvania by 1872 and in Philadelphia in 1880. Educated in the schools of Philadelphia, Marchant studied civil engineering at some unknown institution. His father probably was dead by 1900, when his mother was employed at a Methodist home for the aged in Philadelphia. Census records for 1900 do not show Frank Marchant residing in either Pennsylvania or North Carolina. By the early 1900s, however, he was living in Hamlet, N.C., and was employed as a civil engineer by the Seaboard Air Line Railway. About 1907 he opened a photography studio in Hamlet in rented space on the second floor of O. T. Goodwin's wholesale grocery on Raleigh Street; apparently, he also served for a number of years as the official photographer for the Seaboard Railway. A bachelor, he was living with his elderly mother in a rented house on the corner of Raleigh and Charlotte streets by 1910. The majority of Marchant's photographs were taken on location rather than in a studio, and few portraits have been found.

Most of his work was done in and around Hamlet and Rockingham and consists largely of trains and train wrecks, parades, snow scenes, hotels, town scenes, and people. In addition, he occasionally photographed unusual and newsworthy events and subjects that he believed would appeal to the public. He did other work in Anson and Union counties, while he photographed some train wrecks in Richmond, Moore, and Lee counties and as far west as Rutherford County and east to the railway terminus in Wilmington. Some of his photographs were registered with the copyright office in Washington, D.C. In 1911 he photographed the infamous murder trial of Lewis West and his gang of desperadoes in Wilson County. His camera also documented the construction of Blewett Falls Dam and powerhouse on the Pee Dee River at the Richmond-Anson County border in 1911–12. Leading newspapers throughout the nation carried a few of his photographs to illustrate their stories.

As a part of his photographic enterprise, Marchant produced some of his best photographs as picture postcards. These souvenir cards actually were three-by-five-inch prints developed on emulsified cards designed for mailing and sold at depots, hotels, and drugstores. His work was successful into the 1920s, when it apparently began to decline following the death of his mother from pneumonia on 20 Jan. 1922. Over the years he had been drinking, and an apparent addiction to alcohol worsened after her death. By the 1930s he had ceased to work as a photographer but did continue to develop film for a living.

As his health declined in the 1930s, Marchant became increasingly reclusive. There is nothing to suggest that he was ever a member of any church or fraternal organization in Hamlet. At the time of his death he was living in an old tin-roofed shack on Vance Street. He was buried in the Mary Love Cemetery, Hamlet. Unfortunately, his glass plate negatives and prints were destroyed after his death, but an assortment of his postcards and prints and between seventy-five and one hundred of his negatives are at the State Archives in Raleigh.