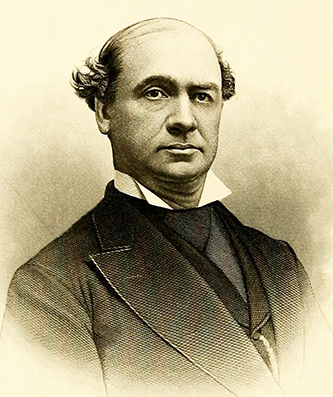 Thomas Courtland Manning, minister to Mexico, lawyer, and chief justice of Louisiana, was born in Edenton, the son of Joseph and Sarah Haughton Manning. In the 1840s he attended The University of North Carolina for a time before reading law and obtaining his license. He practiced in Edenton until 1855, when he moved to Alexandria, La., and opened a law firm in Rapides Parish.

A highly respected attorney, Manning was elected to the state Secession Convention in 1861 and appointed as aide-de-camp to Governor Thomas O. Moore, a fellow North Carolinian; he served until the governor's term expired in 1863, when Manning was made a brigadier general. He became an associate justice of the Louisiana Supreme Court in 1864 and served until the end of the war, when he returned to the private practice of law. In 1872 he was a delegate to the conventions of the Reform and Liberal parties. In the same year he was a presidential elector for the state at large to the Democratic National Convention in St. Louis.

In 1877 Governor Francis R. T. Nichols took office and appointed Manning chief justice of the state supreme court. It so happened that at the time there was a chief justice as well as a full bench of associate justices appointed by the previous governor. When the old justices refused to give way, a dispute arose between the two factions. President Rutherford B. Hayes appointed a commission that attempted to resolve the dispute, but without results. The court crier refused to open court for the old justices; the sheriff of the parish, however, demanded that they vacate the court. When they refused, a sheriff's posse was formed to oust the old justices; it marched along with the Nichols-appointed court, led by Manning, to the court building and took possession. The former justices vacated the courtroom just before the arrival of the posse. Manning served as chief justice until 1886, when President Grover Cleveland appointed him U.S. minister to Mexico.

On 6 June 1883 Manning addressed the literary societies of The University of North Carolina on "The Performance of Political Duties: The Great Need of the Present Day." It was published later in the year and widely read. In 1887 the university awarded him an honorary LL.D. degree.

On 18 Jan. 1848, at Athol in Edenton, Manning married Mary L. Blair, the only daughter of George Blair. They became the parents of eight children: Elizabeth, Mary Cortelia, Winnifred Whitmell, Alston, Nina, Sarah, Maud, and Thomas Cathcart. He died in New York City while attending a meeting of the trustees of the Peabody Fund, of which he was a member. He was buried in New Orleans.

Thomas C. Manning was the uncle of John Manning, Jr., who served as professor of law and dean of the law school at The University of North Carolina from 1881 to 1899. There was a difference of only five years in their ages. John Manning, Jr., was awarded the same honorary degree.