Frank Hoyt Mahan, YMCA official who gave the name basketball to that game, was born in Griggsville, Ill., the son of George and Sarah Hoyt Mahan who very soon after his birth moved to Memphis, Tenn. Both parents died when he was small, and he was raised by an uncle, George Mahan. He spent his youth in Memphis and in Pine Bluff, Ark., and after a brief stint working in a furniture factory he determined to prepare himself to become a Christian worker. In 1893 he was graduated from the secretarial department of the International YMCA Training School, in Springfield, Mass., where he proved to be one of the best athletes in the student body and was captain of several teams. 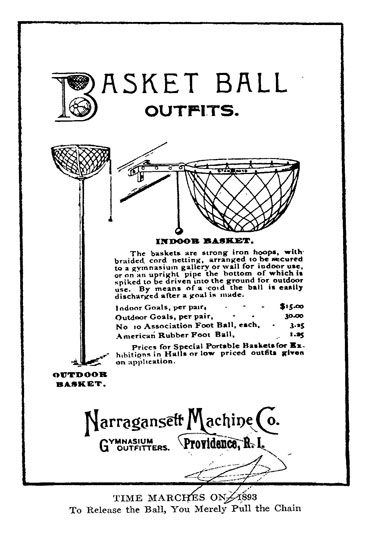 One December day in 1891—perhaps the twenty-first —after several days of rain had kept the young men indoors at the YMCA Training School, a Canadian physical education student, James Naismith, decided to try to devise a new game to entertain the gym class with which his teacher had assigned him to work for two weeks. Naismith hung a peach basket from a railing at opposite ends of the gymnasium. In order to give the young men adequate exercise and at the same time hold their interest, he drew up a set of thirteen rules that are now in the Basketball Hall of Fame in Springfield. Mahan, noted for his physical vigor and strength, scoffed at the new game, but he soon realized that it was a hit with others. The game with no name was played for about a month—both before the students left for the Christmas holidays and after they returned. In January 1892 the student newspaper printed the rules of the game, calling it simply "A New Game." Afterwards, when Mahan asked Naismith what he intended to call the game, Naismith said he had not thought about it. When Mahan suggested "Naismith ball," he was told that such a name would immediately kill it. To this, Mahan responded: "Why not call it basketball? We have a basket and a ball, and it seems to me that would be a good name for it." The name he suggested stuck.

On leaving Springfield Mahan accepted a position at the YMCA in Charlotte, N.C., where he may also have lived before going to Springfield—Naismith's biographer in 1973 described Mahan, at the time the game was named, as "a troublemaker from North Carolina." During six years of service in Charlotte Mahan was responsible for numerous improvements: the building was remodeled, a library of 2,500 volumes was added, night classes were begun, and strong religious classes were established. The track and football teams that he organized were considered to be the best in the South. On leave of absence during the Spanish-American War, Mahan, based in Tampa, Fla., was in charge of YMCA work in army camps. His skill as an organizer attracted wide attention, and he was regarded as one of the best YMCA secretaries in the nation. While in Florida he came to the attention of officials from Lynn, Mass., and in October 1899, after his wartime service, he was named secretary there. Rejecting offers of more rewarding positions elsewhere, he remained in Lynn to direct the building of new facilities and enlargement of the program.

At Pine Bluff, Ark., on 5 July 1893, Mahan married Maud McEwen Henderson. They became the parents of four children: William Henry, Hoyt Henderson, Louise, and Maude. He died of pneumonia in Springfield, Mass., and was buried in Pine Grove Cemetery, Lynn.

Anonymous memorial booklet published in Lynn, Mass. (with a portrait), at the time of Mahan's death (original in possession of his granddaughter, Mrs. A. T. Prentiss, Springfield, Va., Xerox copy in possession of William S. Powell, Chapel Hill).