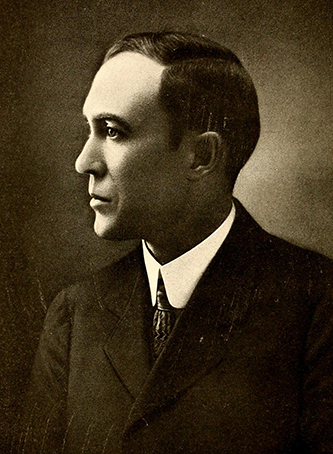 Angus Dhu MacLean, lawyer and legislator, the son of John Allan and Mary Virginia Brown MacLean, was born in Maxton in Robeson County, the heart of the Scottish settlement in North Carolina. He attended Miss Hattie McBryde's school in Maxton and the academy of Professor W. G. Quackenbush in Laurinburg. In 1894 he entered The University of North Carolina, and shortly after his graduation in 1898 he was licensed by the North Carolina Supreme Court to practice law.

MacLean practiced briefly with G. B. Patterson in Maxton, but through the influence of Judge George H. Brown, a maternal uncle, he moved to Washington, Beaufort County, where he became the law partner of John H. Small, a congressman from the First Congressional District. During his career he was associated with various other partners in Beaufort County, including judges Stephen C. Bragaw and William B. Rodman, Jr., Harry McMullan, and John C. Rodman, Jr.

As a young lawyer MacLean was responsible for many important cases handled by the firm while Small was in Congress. The first quarter of the twentieth century saw northern capital coming into heavily timbered areas of eastern North Carolina. As the representative for several lumber companies, MacLean had the mammoth task of securing railroad rights-of-way as well as abstracting titles to the lands in question. In 1912 the "Second Civil War" broke out for Camden, Chowan, Currituck, Gates, Hyde, Pasquotank, and Perquimans counties when litigation developed between the Roper Lumber Company and the Richmond Cedar Works over titles in these counties. MacLean did much of the work in this conflict, both in preparing and trying cases.

However, the case that brought him most attention locally was that of the Peterson will. The wealthy E. R. Peterson had willed all of his property to his wife. MacLean represented relatives who alleged "undue influence." He won locally but lost when the case was appealed to the supreme court. His argument was that since no other relative was mentioned in the will, this alone was "evidence of lack of testamentary capacity and undue influence." As it happened, he argued the case before a court in which each judge had made his own wife sole heir to his property.

In 1927 MacLean was persuaded to accept nomination to the state legislature. His area needed a strong representative because of the dire economic situation. Agriculture had gone into a depression shortly after World War I and stayed there. Moreover, a land boom after the war resulted in the revaluation of land, and taxes, spent primarily for schools and roads, soared. During the period of readjustment more problems presaged public bankruptcy. From the moment MacLean entered the legislature, he became the champion of state-supported schools. In 1927, 1929, and 1931 he was able to get some legislation passed. In 1933 he returned to Raleigh as a senator from the Second District (Beaufort, Dare, Hyde, Martin, Pamlico, Tyrrell, and Washington counties) and was successful in convincing the legislature to vote for eight-month, state-supported schools. Since the country was in the depths of the Great Depression at the time, this legislation was considered to be a significant accomplishment.

In August 1933 MacLean accepted a post with the federal government as assistant solicitor general. In this position he became one of the major defenders of New Deal policies. The most important case he handled concerned the "Gold Clause" by which the federal government could be called on to pay off securities, bonds, and notes in gold. MacLean defended the government's right to pay them off in currency other than gold, won the case, and prevented the total depletion of the country's gold reserves.

In August 1935 he became assistant attorney general but resigned on 30 October to return to Raleigh. He was a senior member in the law firm of MacLean, Pou, and Emanuel until his death two years later. There were many tributes to MacLean by leaders of both state and nation, but Judge William B. Rodman, Jr., who knew him well, summed it up by saying that he "was blessed with a sharp sense of humor, a keen, analytical mind, a high sense of duty and a deep sympathy for the unfortunate."

In Washington, D.C., MacLean was a member of the Brewster and MacLean law firm. He served as president and counsel of the Washington and Vandemere Railroad, attorney for the Atlantic Coast Line, counsel for the Norfolk Southern, and counsel for several large development companies, several banks, and some other business organizations in eastern North Carolina. He was a member of the North Carolina Bar and American Bar associations, the Knights of Pythias, the Benevolent and Protective Order of Elks, the Presbyterian church, and the Democratic party.

MacElyea, Annabella Bunting. MacQueens of Queensdale : a biography of Col. James MacQueen and his descendants with an introduction containing a history of the origin of the clan MacQueen by Hon. A.W. Maclean, and the proceedings of the first Clan MacQueen meeting, at Maxton, N.C., June 3 to 5, 1913. Observer Printing House. 1916. North Carolina Digital Collections. http://digital.ncdcr.gov/cdm/ref/collection/p15012coll1/id/17834 (accessed September 23, 2013).