Robert Calvin Grier Love, Gaston County textile pioneer, was born at or near Crowder's Creek (now Crowders, Gaston County), the fifth son and sixth of eight children of Andrew and Mary Wilson Love. His parents were members of the Associate Reformed Presbyterian Church and named their son for Robert Calvin Grier, their onetime pastor who later became president of Erskine College. His father was a member of the commission that established the boundary between Lincoln and Gaston counties and was the surveyor of that boundary; he was also the presiding justice at the first court in Gaston County.

Little is known about Love's early life other than that he completed whatever formal education he might have had by the time he was sixteen, when his father died and left him Fairview, a farm two miles west of the site on which the Gastonia railroad depot later was built. Love moved there in the late 1850s, built a house on the property, and began cultivating corn, cotton, and other crops and raising livestock. He also did a small amount of surveying with instruments inherited from his father. On 29 Mar. 1860 he married Susan Elizabeth Rhyne (5 Oct. 1839–8 Jan. 1916), the daughter of Moses H. and Elizabeth Hoffman Rhyne. Love was a captain in the Home Guard in Gaston County during most of the Civil War, serving briefly in eastern North Carolina towards the end of the war.

In the winter of 1870–71 he bought the dry goods store of his brother-in-law, Abel P. Rhyne, in Woodlawn (now Mount Holly), Gaston County, and moved his family there; about 1874 he added a cotton gin to his business, trading for cotton that he sold in Charlotte. He trained as clerks in his store several of the future business leaders of Gaston County (among them, David Rhyne and Alonzo Abernethy). Love also made loans at interest to his neighbors, served for some years as postmaster, built in 1873 the first framed schoolhouse in Gaston County, and was an elder in the Goshen Presbyterian Church. Seven of his eight children had been born by the end of his ten-year stay at Woodlawn.

As his children began to enter their teens, Love decided to move to Kings Mountain so they could more easily attend W. T. R. Bell's high school. In the summer of 1880 he built a steam-powered cotton gin in Kings Mountain and moved there the next spring. Love also operated a gristmill and traded in cotton and other farm products before problems at the high school and opportunities in Gastonia led him to move to the latter town in the fall of 1883.

Love's first enterprise in Gastonia was a general store which he operated with I. Q. Holland and S. M. Wilson as Holland, Love and Company. In 1887 Love left merchandising for the textile business. In that year, with George A. Gray and others, he founded Gastonia's first textile mill and the first steam-driven mill in Gaston County, the Gastonia Cotton Manufacturing Company. Love was the president and manager of the company from its beginning and remained so for the rest of his life. Under his direction, the company paid for itself in three years and thereafter consistently yielded impressive profits. The mill, which opened with one hundred employees, produced cotton yarns and eventually cotton cloths for curtains, flags, and other items. Both the number of employees and the physical plant grew through the years, and the enterprise, popularly known as the "Old Mill," was the forerunner of a sustained textile boom in the Gastonia area. 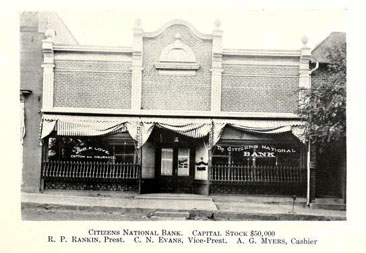 Among Love's other interests, he became president of Love Trust Company, a pioneer bank in Gastonia, which later became the Citizens National Bank. He was active in the development of public schools, donating the building that served as the first public high school in Gaston County. A dedicated opponent of the liquor industry, he once expressed a wish that every distillery in the county be replaced with a cotton mill and lived to see that happen. Love helped establish the First Presbyterian Church of Gastonia where he became an elder; he also was an elder of Olney Presbyterian Church. While maintaining his membership in the Presbyterian church, towards the end of his life he frequently attended services at the local Associate Reformed Presbyterian Church.

Love was instrumental in the establishment of other cotton mills in Gaston and Lincoln counties, including the Avon Mill in Gastonia and the Daniel Mills in Lincolnton. Three of his sons were involved in the management of area mills; these undertakings were successful except for a disastrous situation at the Loray Mills, the salvaging of which involved Love in a great deal of emotional strain and financial sacrifice in his last years. In 1924 Love's son James Lee (for many years a mathematics professor at Harvard University) and his grandson James Spencer Love moved the Gastonia Cotton Manufacturing Company equipment to Burlington, laying the foundations for what was to become Burlington Industries. James Lee Love's first wife was Julia James (June) Spencer, the daughter of James M. and Cornelia Phillips Spencer. Love's other children were Margaret Elmira, John Franklin, Edgar, William Abel, Mary, Robert Andrew, and Susan.

R. C. G. Love was known as a self-effacing, shrewd, thrifty, and dutiful man who was impatient with behavior less energetic and determined than his own. His native shyness and resolute support of causes he considered worthwhile limited his popularity, but Love was highly respected by much of the Gastonia area business and community leadership. He died of an apparent heart attack at the home of one of his daughters in Brunswick, Ga.

Two memorials to Love have been established since his death. The seventeen-acre Love Park was given to the town of Gastonia by James Lee Love and his wife in 1941. In 1956 Burlington Industries Flint No. 1 Plant in East Gastonia was renamed the R. C. G. Love Mill.

My mother was a grand

My mother was a grand daughter of RCG Love. I am studying her background and that of her mother Margaret Elmira (Elmina?) Love. Other names that might be of interest are Andrew Love Tait, who was CEO of the Tait Yarn Company and my uncle as well as mayor of Linconton at one point in time. RCG Love died at 903 Dartmouth St. in Brunswick GA in 1904 where I was born two blocks away in 1940. As they say, the journey is the destination.
My journey through more than 40 years in Japan is being consummated by my interest in the Loves and the Taits.

May God be with you.

I have documents that RCG

I have documents that RCG Love died in Brunswick, GA in 1907.