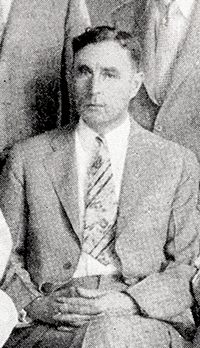 Thomas Williams Mason Long, physician, legislator, and administrator, was born at Longview, Northampton County, the son of Lemuel McKinne and Betty Gray Mason Long. He spent his childhood at Longview, the residence of his grandfather, Judge Thomas Williams Mason. Here, with his brothers and sister, he was taught by tutors until his early teens, when he attended Petersburg Academy in Petersburg, Va., and Virginia Polytechnic Institute for one year. In 1903 he entered the Medical School of The University of North Carolina, from which he transferred in 1905 to the University College of Medicine in Richmond, Va. Due to a lengthy illness resulting from typhoid fever, he was out of college for a year and received his degree in 1908. In the same year he was licensed to practice in North Carolina.

Long served his internship at Petersburg State Hospital and returned to Northampton County to practice briefly in Garysburg. In 1910 he began a lifelong practice in Roanoke Rapids in adjoining Halifax County. On 7 Dec. 1910 he married Maria Greenough Burgwyn, also from Northampton County. They were the parents of five children: Betty Gray, Maria Greenough Burgwyn, Margaret Ridley, Thomas Williams Mason, Jr., and Nicholas.

When Long went to Roanoke Rapids, on the banks of the Roanoke River, it was a cotton mill village plagued by malaria and called by many people a death trap; the eradication of this dreaded malady challenged the doctor's learning and skill. With the help of the U.S. Public Health Service and the cooperation of public officials, he successfully campaigned for mosquito control and transformed Roanoke Rapids into the healthiest town on the Roanoke River.

At the time of his arrival in Roanoke Rapids, there was no hospital in Halifax County and the income of mill workers was low. To bring adequate medical service and to lighten their burden, he and two other physicians, H. C. Irwin and E. H. Adkins, founded the Roanoke Rapids Hospital in 1912. Long was president of the institution's board of directors from 1912 to 1931 and a director until his death. He also devised a plan whereby a small deduction was made from the pay of each employee for medicine and hospitalization. Immediately successful, the plan resulted in the formation of the Hospital Savings Association with the cooperation of the Medical Society of the State of North Carolina, and that evolved into the Blue Cross–Blue Shield plan.

Long was chairman of the board of directors of the North Carolina Sanatorium (1922–31), a member of the State Board of Medical Examiners (1926–32), and director of the State Hospital in Raleigh (1918–20). He was secretary-treasurer of the Medical Society of North Carolina from 1937 until his death. In business, he became successively director, vice-president, and president of the First National Bank, Roanoke Rapids; a director of the Roanoke Mills Company and of the Rosemary Bank and Trust Company; and president of the Roanoke Pharmacy Corporation. In public life, he was chairman of the Roanoke Rapids Board of Commissioners (1915–22), mayor (1922–39), and a trustee of the graded school district (1915–30). During the period, he was a dominant political force in Halifax County.

At the state level, Long served in the house of representatives during part of the 1931 session and in the senate in the sessions of 1933, 1937, and 1939. Death cut short another senate term in 1941. He successfully guided the legislature in enacting outstanding health laws: premarital health tests, blood tests for syphilis for expectant mothers, and diphtheria immunization for all children. Through his efforts, the legislature approved an appropriation for the establishment of the tubercular sanatorium in eastern North Carolina. He died in Raleigh following a meeting of the Senate Finance Committee.