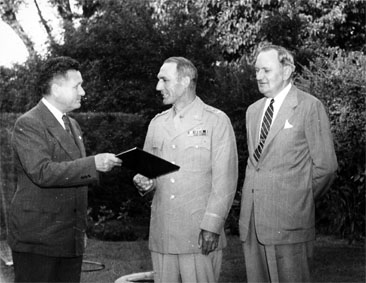 William Carey Lee, army officer and "father of the Airborne," was born in Dunn, the son of Eldrege, a hardware merchant, and Emma Massengill Lee. He attended local public schools and studied at Wake Forest College from 1913 to 1915 and at North Carolina State College from 1915 to 1917, lettering in football and baseball. At twenty-two he entered the army as a second lieutenant of infantry. After seeing combat duty in France as a platoon leader and company commander, he received a regular army commission in 1920. Two years later he was graduated from the Company Officer's Course at Fort Benning, Ga., and then taught military science at North Carolina State College until 1926. Following that tour of duty he served in Panama for three years.

Lee was an executive officer of the Second Infantry Brigade, First Division, when he was ordered to the Office of the Chief of Infantry in Washington, D.C., in 1939. Here he became the leading member of a small group advocating the development of an American airborne force. Major Lee persuaded Major General George A. Lynch, chief of the infantry, that the vertical envelopment of troops was a practicality.

When the War Department ordered the formation of a test platoon of paratroopers, Lee, on 25 June 1940, was given responsibility for compiling information, coordinating various groups, and organizing the test platoon. Promoted to lieutenant colonel, he made several major contributions to the test platoon training program, the most important being the construction of four parachute towers to help recruits master the art of jumping. In March 1941, under the chief of infantry, the War Department created a Provisional Parachute Group headquartered at Fort Benning to direct the 501st Parachute Battalion. Lee opened this parachute school on 30 Apr. 1941.

Lee gradually convinced the chief of army ground forces, Lieutenant General Lesley J. McNair, of the value of airborne divisions as specially trained and separately developed fighting units. The need for unity of command for the newly created regimental organization was recognized on 21 Mar. 1942 with the creation of the U.S. Airborne Command under Lee, who was now a colonel. The Airborne Command was located at Fort Bragg, N.C., from 21 Mar. to 15 May 1942. Lee was promoted to brigadier general on 19 Apr. 1942.

The Airborne Command was the nation's first effort to train airborne units on a major scale. The parachute school was placed under the Airborne Command and the program continued to expand. For his leadership during this critical period of the Airborne's development, Lee received the Distinguished Service Medal.

In the summer of 1942 Lee went to England with Generals Dwight D. Eisenhower, Henry H. Arnold, and Brehon B. Somerwell to coordinate with the British the invasion of Europe. Lee's suggestion that the American airborne forces be organized as divisions coincided with the British proposals. General Mark Clark and General McNair accepted Lee's recommendation, and on 30 July 1942 McNair ordered the activation of two airborne divisions to become effective 15 August.

Lee's leadership in the development of the concept of airborne divisions ensured his promotion to major general on 10 Aug. 1942. He assumed command of the newly created 101st Division at Fort Claiborne, La., and in September it moved to Fort Bragg for further training. By the following January, all types of training had been completed; exercises and maneuvers occupied the spring and summer of 1943. During this period, Lee successfully combined parachute and glider regiments of the 101st Division into a cohesive fighting unit. In March 1943 he went to England to participate in planning the Normandy invasion. His recommendation for an expanded role for airborne forces was accepted by President Franklin D. Roosevelt and Prime Minister Winston Churchill.

Lee returned to England on 23 Aug. 1943, and by January all of the 101st Division had arrived and was engaged in training and conditioning. Lee organized the airborne planning agency that began the detailed projection of the airborne phase of Operation Overlord. In the fall of 1943, he wrote the airborne doctrine and the tactical deployment procedures that were used in the Normandy invasion; in December and January, he participated in an almost constant series of conferences on the invasion with Generals Eisenhower and Omar Bradley. The selected drop zones fulfilled Lee's exact predictions of August 1942 to General Matthew Ridgeway, commander of the other original airborne division, the Eighty-second.

But fate played a cruel trick on the "father" of the American airborne forces. On 5 Feb. 1944 Lee suffered a heart attack and by 4 March it was confirmed that he could not return to active duty. Thus Lee was denied the opportunity to lead the 101st Division into Normandy personally. On 9 April he began the journey home, but his successor as commander of the 101st, General Maxwell Taylor, urged the men of the 101st to shout their founder's name as they jumped over Normandy. On the night of 5–6 June 1944, the name "Bill Lee" filled the sky behind Utah Beach. Major General Lee retired in December 1944.

Lee's first order to the 101st on 19 Aug. 1942 set the division's mission and was indeed prophetic. "The 101st," he wrote, "has no history, but it has a rendezvous with destiny . . . we have broken with the past and its traditions to establish our claim to the future. Due to the nature of our armaments and tactics . . . we shall be called upon to carry out operations of far-reaching military importance . . . we shall go into action when the need is immediate and extreme."

Lee spent his retirement in his native town, often writing and discussing airborne warfare and its future. A community and civic leader of Dunn and of Harnett County, he was a Rotarian, a Mason, and a member of St. Stephen's Church in nearby Erwin. He also was the first U.S. airborne adviser and consultant to the United Nations on the concept of an international airborne police force. In 1945, as the state's most distinguished leader of World War II, he was awarded the honorary doctor of military science degree by North Carolina State University.

On 5 June 1918 Lee married his childhood sweetheart, Dava Johnson. They had no children. Lee was buried in Greenwood Cemetery, Dunn.

Leonard Rapport and Arthur Northwood, Jr., Rendezvous with Destiny: A History of the 101st Airborne Division (1948).