Charles Cochrane Lee, teacher and Confederate officer, was born in Charleston, S.C., the son of Stephen and Carolina (Lee) Lee. His father attended the U.S. Military Academy and was an instructor in the South Carolina Military Academy in Charleston until 1846, when he opened a boys' school in Asheville which he operated until his death in 1879. Young Charles undoubtedly was educated in his father's school before being appointed to the U.S. Military Academy in 1852. He was graduated fourth in his class in 1856 and commissioned second lieutenant of ordnance. Assigned to the Watervliet Arsenal, N.Y., he served until 31 July 1859 when he resigned.

At the urging of a number of prominent men in the state, Daniel Harvey Hill opened the North Carolina Military Institute in Charlotte with 40 students on 1 Oct. 1859. By the end of the year, enrollment had grown to 142. The first catalogue listed Lieutenant Charles C. Lee as professor of chemistry, instructor of infantry tactics, and commandant of cadets. Lee also taught mineralogy and geology, and in all of his classes, the catalogue noted, the standards of the U.S. Military Academy were to be maintained.

On 20 Dec. 1860 Lee's native state seceded from the Union, and on 8 Jan. 1861 the North Carolina General Assembly appropriated $300,000 for the purchase of arms and ammunition for use in case of need. Governor John W. Ellis designated Lieutenant Lee to arrange for this purchase by the state, and Lee departed for Richmond, Baltimore, Wilmington, Del., Philadelphia, New York, New Haven, Springfield, Hartford, and other places. He carried with him an extensive list of military supplies drawn up by D. H. Hill and C. W. Tew. Soon he was able to report to the governor that he had found what he sought and that suppliers were willing to sell to the state. Two, however, could not guarantee delivery if North Carolina seceded from the Union. In March, Lee served in the ordnance department at Charleston under General Pierre G. T. Beauregard preliminary to the capture of Fort Sumter on 13 April. 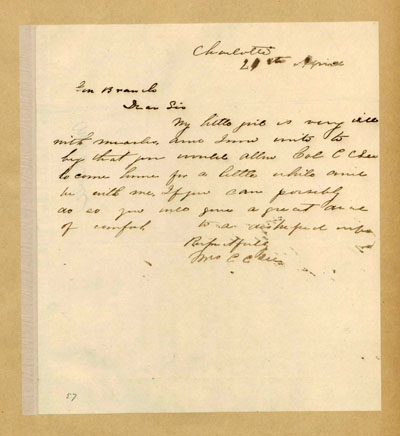 North Carolina seceded from the Union on 20 May. A Camp of Instruction had previously been established at the state fair grounds in Raleigh, and on the twenty-ninth the adjutant general of the state issued orders to D. H. Hill for the organization of the First Regiment of North Carolina Troops. Lee, accompanied by a corps of cadets from the North Carolina Military Institute, set out for Raleigh. There, on 11 May, Daniel H. Hill was elected colonel and Lee lieutenant colonel. Within a week the regiment was transferred to Virginia, where it erected fortifications at various places in the vicinity of Yorktown and Richmond; it also participated in the victory at Big Bethel on 10 June. Since the troops had been enlisted for just six months, they were returned to Raleigh and mustered out of state service on 12 November.

On 20 Nov. 1861 Lee was appointed colonel of the Thirty-seventh Regiment at the time of its organization near High Point. He was described as "a splendid officer—cool and courageous and [who] has the entire confidence of his regiment." His new command was soon transferred to Camp Mangum near Raleigh where it remained until it was moved to New Bern on 11 February. A Federal amphibious force landed below New Bern on 13 Mar. 1862 and quickly routed the Confederate defenders. The Thirty-seventh regrouped at Kinston and in early May was sent to Virginia to help protect Richmond from Federal forces only seven miles away. It participated in the Battle of Hanover Court House as well as in other skirmishes. It was in the Seven Days' Battle where the Confederates suffered staggering losses. Colonel Lee was fatally wounded at Frayser's Farm (Battle of Glendale) on 30 June, but ultimately Federal forces withdrew and the Confederate capital was secure.

A few days before his death, Lee was commended by General L. O'B. Branch: "In the late brilliant operations below Richmond, you were the first brigade to cross the Chickahominy, you were the first to meet the enemy, the first to start him on that retreat in which the able combinations of our General-in-Chief allowed him to take no rest until he found shelter under the guns of his shipping." Lee's own men spoke of him as "an excellent man, and an accomplished officer," as "a brave experienced officer, and pure man," and as their "beloved colonel." According to D. H. Hill, he was "one of the finest officers of the South." He clearly was an officer of great promise and of undoubted devotion to the cause of Southern independence.

Soon after his graduation from the U.S. Military Academy, Lee married Anna Tripp, a native of South Carolina. Their first child, Anna C., was born while he was stationed in New York, but their other children, Eula, Charles, and Florence, were born in North Carolina. The 1860 census for Mecklenburg County indicates that Lee owned considerable real and personal property, and that Ann H. Tripp, forty-six, who was a member of his household, also owned a large personal estate. Presumably she was his mother-in-law. Lee died intestate. The trustees of his estate reported that he had $138 cash on his person and his horses, tools, and furniture realized only a modest sum. In 1911 his widow, now Annie P. Lee Moyle of Charlotte, applied for a Confederate widow's pension.

Lee's remains were returned to Asheville and buried in Riverside Cemetery.

Catalogue of the Officers and Cadets of the North Carolina Military Institute (1860).