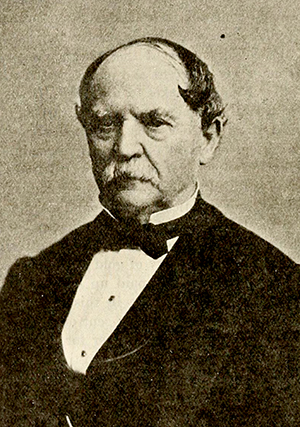 James Franklin Doughty Lanier, financier, was born in Washington, Beaufort County, the son of Alexander Chalmers and Drusilla Doughty Lanier. On his paternal side he was of Huguenot descent, shared a common ancestor with George Washington, and was distantly related to the poet Sidney Lanier. His grandfather, James Lanier, was a captain in the light cavalry regiment commanded by Colonel William Washington in the Revolution; later he served under General Anthony Wayne in the campaign against the Indians of the Northwest Territory.

In 1807, after living briefly in Bourbon County, Ky., the Lanier family moved to Eaton, Preble County, Ohio, where Alexander Lanier freed his only two slaves; during the War of 1812, he served as a major under General William Harrison. In 1817 the family moved to Madison, Ind., where the father operated a dry goods store. In declining health, he died in 1820 leaving debts that young James F. D. Lanier eventually paid.

While the family lived in Eaton, Lanier was a student at the village school. Beginning in 1815, he attended an academy for a year and a half at Newport, Ky. When the family moved to Madison in 1817, he was offered, but declined, an appointment to West Point; instead, he attended a private school in Madison for a year and a half. In 1819 Lanier began the study of law in the office of General Alexander Meek in Madison, completing his education in law in 1823 at Transylvania University. Lanier set up a law practice in Madison in 1824 and was appointed assistant clerk of the Indiana House of Representatives, becoming chief clerk in 1827. During this time, he made many influential friends and amassed a considerable fortune in real estate investments.

In 1833 he retired from his law practice to assume the presidency of the Madison branch of the State Bank of Indiana, in which he was the principal individual stockholder. As president, he served on the state bank's Board of Control with Hugh McCulloch, later secretary of the U.S. Treasury. When the Madison bank successfully weathered the panic of 1837, Secretary of the Treasury Levi Woodbury praised Lanier's management and appointed him as pension agent for part of the north-western region.

After promoting railroad construction in Indiana, Lanier went to New York City in 1849; there he and Richard Winslow formed Winslow, Lanier and Company, a general banking business specializing in negotiating railroad securities. The firm prospered, and Lanier made extensive connections with prominent banking houses abroad. In 1865 and 1868, while abroad as an unofficial agent of the federal government, he used his connections to convince European banking houses of the financial stability of the government.

Lanier is best remembered for his financial support of Indiana during the Civil War. At the request of Republican Governor Oliver P. Morton, later a U.S. senator from Indiana, Lanier lent the state $400,000 to arm and equip troops and $640,000 to pay the interest on the state debt. The money was loaned without any security, but at the end of the war the legislature reimbursed Lanier the money plus interest.

In 1819, in Madison, Lanier married Elizabeth Gardner, by whom he had eight children. After her death in 1846, he married Mary McClure in 1848 and they had three children. His home in Madison, a sophisticated example of Greek Revival architecture designed by the noted architect Francis Costigan in 1844, is maintained as a museum by the state of Indiana. Lanier died in New York City and was buried in Greenwood Cemetery.

Albert Welles, The Pedigree and History of the Washington Family (1879).