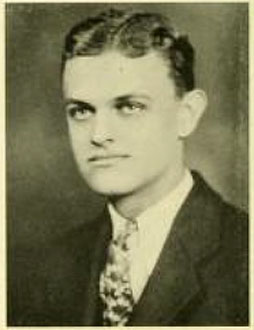 John Albert Lang, Jr., teacher, federal civil servant, and major general in the U.S. Air Force Reserve, was born in Carthage, the son of John A., Sr., and Laura Kelly Lang. His father was a son of John Frederik Lang who changed his name from Jansson when he migrated in 1875 from Sodra Bro Gallesta, Sweden, to New Britain, Conn., where he was active in the cultural life of the Swedish community before moving to North Carolina. His mother was the great-granddaughter of Abel Alexander Kelly, a Presbyterian who left Ireland with his family sometime prior to 1825 and settled in Moore County, N.C., establishing a gristmill and subsequently serving two terms in the state legislature; he was a staunch Unionist with antislavery leanings.

Lang was graduated, Phi Beta Kappa, from The University of North Carolina in 1930, remaining for another year to earn a master of arts degree before accepting a position as head of the English Department and professor of government at Georgia Military Academy. The first significant step in his public or political life came in 1935, when for two years he served as president of the National Student Federation with offices in New York City. This led to his appointment as assistant to the director of Civilian Conservation Corps Camp Education in the U.S. Office of Education, a post he occupied until 1938, when he was appointed state administrator of the National Youth Administration in North Carolina. In 1942 he enlisted in the U.S. Army Air Corps, eventually serving in Alaska, North Africa, and Italy; he had advanced to the grade of major by the time he returned to private life in 1946. After a brief period with the Better Health Association in Raleigh, he was selected to be the administrative assistant of U.S. Representative Charles B. Deane, of North Carolina, whom he served for ten years until the congressman was defeated. During that time, Lang honed his political skills to a high polish and developed a wide circle of friends on Capitol Hill, becoming a valuable political asset in the process. As a consequence, after a brief stint with the House Committee on Government Operations, he was chosen to be the administrative assistant of U.S. Representative Robert E. Jones, of Alabama, whom he served from 1957 to 1961. In the latter year, he was appointed deputy for Reserve and ROTC Affairs in the Office of the Secretary of the Air Force.

Lang's move from Capitol Hill to the Pentagon marked a merger of his political career with his role as a member of the Air Force Reserve, in which he had been active since World War II. The assignment proved to be a happy one; Lang's expansive personality and willingness to work tirelessly in the interest of others made him nationally popular with reservists as well as with his superiors in the secretariat. Soon after taking office in 1961, he performed brilliantly in the mobilization of Air National Guardsmen and Air Force Reservists for the Berlin and Cuban crises. For his efforts in this period he was given the Exceptional Civilian Service award, an honor he subsequently received on two other occasions.

A big, broad-shouldered man standing well over six feet, Lang was ever concerned with keeping fit; during his years in the secretariat, he regularly used his lunch break to stride vigorously around the perimeter of the Pentagon. The principal qualities of personality that made him so effective were his expansive, outgoing nature, his generosity, and his genuine delight in serving others; his unspoken motto seemed to be: any friend of my friend is a friend to me. It was characteristic of him that despite the many public concerns that burdened him during his long residence in Washington, for nineteen years he found time to teach a Bible class in his church. His frequent references to the folk wisdom of rural sages from his beloved Moore County became something of a byword in the Pentagon and greatly endeared him to his colleagues. Lang was often called upon to present some message of concern to the Air Force before a large audience. With the reflexive response of a professional politician to crowds, he genuinely enjoyed these occasions; he was never happier than when the audience happened to be in North Carolina.

By the time he retired in 1971 after thirty-six years of federal service, Lang had received many marks of distinction, among them the Air Force Association Citation of Honor (1964) and on two occasions the U.S. Distinguished Service Citation of the Reserve Officers' Association (1964 and 1969), as well as military decorations including the Legion of Merit, the Meritorious Service Medal, the Army Commendation Medal, and the Air Force Commendation Medal.

Retirement from federal service did not end Lang's career. From Washington he moved to Greenville, where he was appointed vice-chancellor of East Carolina University. Scarcely had he embarked on this new career when Governor Robert Scott called him to Raleigh in March 1972 to accept a cabinet office as secretary of the newly formed Department of Military and Veterans' Affairs. In this position, he supervised the office of the North Carolina Adjutant General including the National Guard, Office of Civil Defense, Civil Air Patrol, Department of Veterans' Affairs, and Armory Commission. At the close of the Scott administration, Lang returned to his post as vice-chancellor of East Carolina University where he died unexpectedly at age sixty-four from an infection. He was buried in his hometown of Carthage.

"The History of the Willie P. Mangum Medal."  The Dialectic and Philanthropic Societies at the University of North Carolina at Chapel Hill. http://diphi.web.unc.edu/2013/04/04/the-history-of-the-willie-p-mangum-medal/ (accessed August 14, 2014).