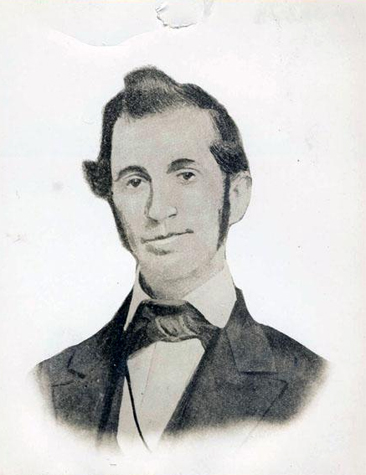 William Lander, lawyer and Confederate congressman, was born in County Tipperary, Ireland, the oldest child of Samuel and Elizabeth (Eliza) Ann Miller Lander. The family immigrated to America in 1818, first landing in Boston and moving southwards in easy stages. The Landers reached Salisbury in 1824 and moved to Lincolnton in 1826. The father became a successful coach maker and also served as a lay Methodist minister. William attended Lincolnton Academy and Cokesbury College in South Carolina, then read law in Lincolnton under James R. Dodge. He was admitted to the bar in 1839. Lander's oratory and legal brilliance soon earned him a lucrative practice, and he later acquired and operated a small farm.

In 1852 Lander was elected to the House of Commons; in his one term, he directed most of his attention to clarifying the problems caused by the division of Lincoln and Gaston counties in 1846. He was elected county solicitor and served briefly before becoming district solicitor in 1853. He held the latter position until 1862 while continuing his law practice.

Lander made his political reputation during the secession crisis. At the Charleston Democratic Convention of 1860 he worked for party unity, but when the convention broke up and reconvened at Baltimore to nominate Stephen A. Douglas for president, Lander announced for his delegation "that a very large majority of our delegation is compelled to retire permanently from this convention on account . . . of the unjust course that has been pursued." He then joined the other Southern "bolters" to nominate the Breckinridge-Lane ticket. In October, in a highly publicized debate with Zebulon B. Vance, Lander admitted that the election of Abraham Lincoln would not itself be a cause of secession but warned that succeeding events might precipitate it. By early 1861 Lander was an active Secessionist, and as a member of the May convention he voted to leave the Union. In November, he won a seat in the Confederate House of Representatives over two other candidates.

In Richmond, Lander served on the committees of Patents and the Quartermaster's and Commissary departments. Generally he was a stalwart, though unassertive, Confederate nationalist, supporting most proposals giving the central government whatever controls it wished over individuals and the economy. For instance, during the debates on conscription his only concession to state interests was his support of an unsuccessful amendment requiring the president to make the first calls for conscripts on states that had furnished the least manpower. Only in his conviction that repudiating the old Treasury notes would constitute a violation of contract did Lander reflect the dissatisfaction of his state with Confederate legislation. In 1863 he lost his race for reelection as a peace candidate. After returning to private life, he practiced law until his death. He was buried in the Methodist church graveyard in Lincolnton.

Lander's contemporaries esteemed him as a constant student of the law and of classical literature, and they often commented on his phenomenal memory. His former law partner, Judge David Schenck, stated that he had "never heard one who was the equal of William Lander before a jury." From 1858 to 1867 Lander was a trustee of The University of North Carolina. On 8 May 1839, he married Sarah Connor of Cokesbury, S.C. They had six children—Samuel, Agnes, Ella, Frank, William, and Clara—though the last two died in childhood.