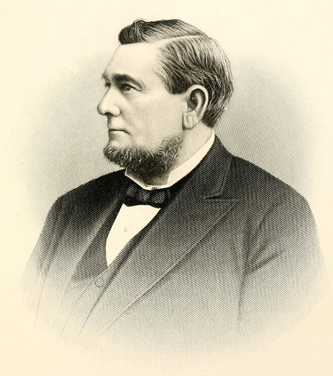 David Schenck, lawyer, judge, public servant, and author, was born to David Warlick and Susan Bevins Schenck in Lincolnton. His father, a surgeon, was the son of the founder of the earliest cotton mill in the South. David Schenck was educated in local schools, including Chief Justice Richmond Pearson's famous "Richmond Hill" law school. He began a practice in Dallas, Gaston County, in 1857. Shortly after moving to Dallas he was appointed county solicitor. Also while living there he met and married Sallie Wilfong Ramseur.

In 1860 the Schencks returned to Lincolnton, where he was promptly made solicitor for Lincoln County and then elected as the youngest delegate to the Secession Convention. When war came in 1861, he served as Confederate States receiver, in which capacity he collected large sums of money for the Confederacy. In the immediate postwar period he took an active role in public life, serving as alderman and mayor; in the life of his church, as a Presbyterian elder; and in educational matters, as a trustee of Davidson College and an enthusiastic supporter of better public schools. These services were recognized when, in 1874, he was nominated by the Democratic party and elected as judge for the Ninth Judicial District. The courts had come into public disrepute during the early Reconstruction period, and Judge Schenck performed notable service in restoring confidence in the sanctity of the law. His most notable cases involved the conflict of authority between the state courts and the federal courts. Not surprisingly, Schenck vigorously defended the state's right of jurisdiction. The University of North Carolina recognized his legal services in 1880, when it awarded him an honorary LL.D.

The next year he resigned from the bench to accept a position as general council with the prosperous Richmond and Danville Railroad (later Southern Railway). Since the Railroad's main offices were in Greensboro, Schenck moved his family to that community. Despite an offer of appointment to the North Carolina Supreme Court, he was firm in his decision to remain in private practice. In Greensboro Schenck continued to evince interest in those areas of public life where he had distinguished himself previously. As a town commissioner he vigorously pushed for modernization of community facilities like paved streets and sidewalks, electric lights, and better schools. Schools were one of his foremost interests, so it was personally gratifying when he dedicated the town's first brick schoolhouse in 1887.

His most significant personal project, after 1886, was saving the Guilford Battle Ground. It was largely through his efforts that a company was formed to raise money and arouse public interest in rescuing the battle site from oblivion and decay. It was also through his support, physical and financial, that land was purchased, money was appropriated by the state legislature for maintenance, and monuments and other markers were erected. His energy and foresight were rewarded in 1917, when the Guilford Battlefield was incorporated into the National Park Service.

Schenck's interest in history did not end with Guilford. In 1889 he published his study, North Carolina, 1780–81. This book was the first comprehensive attempt to put the Revolutionary War campaigns of Nathanael Greene and Lord Charles Cornwallis into perspective. Although the text is now dated, it still contains valuable information for students of the Revolutionary period.

The last years of his life were marked by debilitating illness, but he still found time to devote to his practice, his family, and his extensive interests. When Schenck died, numerous newspapers around the state carried obituaries praising him as an erudite, energetic, and multifaceted public figure.

Shepherd, James E. An address by Hon. James E. Sheperd on the life and character of the late Judge David Schenck, delivered at Guilford Battle Ground on the occasion of the unveiling of a monument to his memory--July 4, 1904. Greenesboro, The Guilford Battle Ground Co. 1904. https://archive.org/details/addressbyhonjame00shep (accessed March 21, 2013).