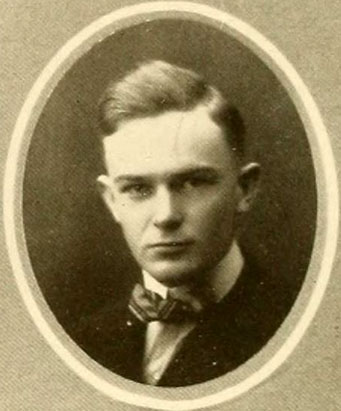 John Walter Lambeth, Jr., manufacturer and congressman, the son of John Walter and Daisy Hunt Sumner Lambeth, was born in the Lambeth Hotel, Thomasville, at the time owned and operated by his parents. He was graduated from Trinity College in Durham in 1916 and in the fall entered Harvard University to study business administration. Before completing his first year there, however, he volunteered as a private in World War I. As a sergeant in the First Army, American Expeditionary Force, he participated in the St. Mihiel and Meuse-Argonne offensives. At the end of the war he studied for a few months at London University.

After returning home, Lambeth joined his father in the operation of Lambeth Furniture Company, a plant they soon converted to the streamlined manufacture of bedroom furniture. He was secretary-treasurer and later president of the company. Although the factory prospered, the partners sold it in 1928. A few months later the younger Lambeth also resigned as vice-president of the local First National Bank, an office he had held for several years. These steps left him free to pursue a course he had long anticipated. As a boy he had listened to his elders discuss politics, and he studied government and read biographies of noted leaders. In 1921 he took time out from business to serve a term in the state senate. From 1925 to 1929 he was mayor of Thomasville and during that time instituted improvements in city government such as a sinking fund for bonded indebtedness and a study of city planning.

In 1930 Lambeth was elected to the U.S. House of Representatives as a Democrat and continued to win reelection until he retired in 1939. While in Congress, he was unusually attentive to the needs and wishes of his constituents. As chairman of both the House Committee and the Joint Committee on Printing, he endeavored to reduce the cost of public printing and struggled to convince other congressmen to cease the long-standing practice of free distribution of government documents. In many ways, he was able to effect economy and increase efficiency in government printing.

His most important service, however, was on the Foreign Affairs Committee. During the 1930s, no member of Congress was more active and outspoken in defense of Woodrow Wilson and the idea of collective security—the maintenance of the peace of the world by nations acting cooperatively against an aggressor nation. In 1937 Lambeth was one of six members of Congress selected to participate as an official delegate in the dedication of World War I monuments and chapels erected at American battlefields in Europe. He delivered the dedicatory address at Bellicourt (Aisne), where the Thirtieth Division took part in the decisive Battle of the Hindenburg Line in September 1918. In further recognition of his service in the field of foreign affairs, President Franklin D. Roosevelt in 1939 tendered Lambeth the post of minister to Bulgaria, but he declined it.

After his retirement from Congress, Lambeth devoted his time to his investments, including real estate and farming. Under partnership arrangements, he operated Cedar Lodge farm and dairy as well as two other farms, making practical experiments in grass farming and the scientific harvesting of trees. Contributing to the life of his hometown, he was the first president of the chamber of commerce (1949), an organizer of the United Fund efforts, and a leading participant in the celebration of Thomasville's centennial. He also was active in a number of civic clubs, patriotic groups, and fraternal organizations. A member of the Methodist church from childhood, he served on boards of stewards and made significant donations for the erection of two Methodist churches in the community. In addition, he assisted in funding a Thomasville branch of the county library and in his will left the library a large bequest.

In 1949 Lambeth married Helen Urban of Bridgeport, Conn., and they were the parents of one child, Diane Sumner. He died in Washington, D.C., and was buried in the Thomasville City Cemetery.