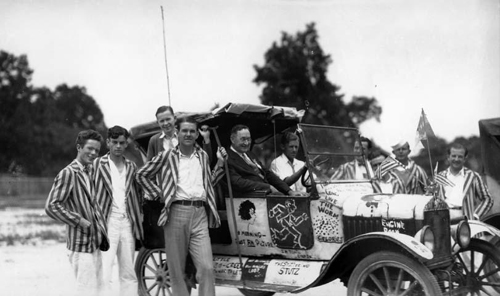 James Kern ("Kay") Kyser, orchestra leader, actor, and Christian Science lecturer, was born in Rocky Mount, the son of Paul B. and Emily Royster Howell Kyser. As a student at The University of North Carolina in 1926, he organized his first band and played for college dances. At Chapel Hill he was also a cheerleader and later wrote the fight song, "Tar Heels on Hand." Following his graduation in 1928 he took his band on tour, playing for theaters, hotels, nightclubs, and radio around the nation. In 1934, over the National Broadcasting Company, he began a weekly program, "College of Musical Knowledge," which quickly became one of the most popular programs on the air. He introduced and featured many singers and instrumentalists who worked with his orchestra as well as with others. 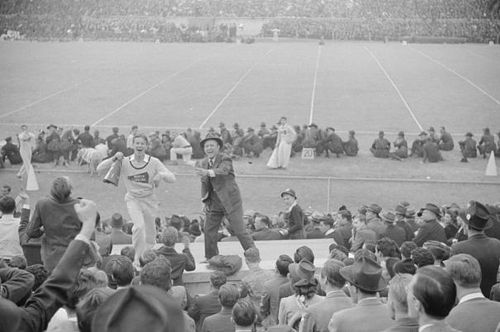 With a good ear for music and a keen sense of humor, his career flourished and he acted in a number of motion pictures and recorded for Columbia Recording Corp. During World War II he frequently entertained troops overseas. It was while thus engaged that Kyser became impressed by the sacrifice many servicemen were making and resolved to end his career in which he played and entertained for money. He was unable to free himself from professional commitments, particularly television, until 1950, but from that time he devoted himself to other matters. In 1951 he moved to Chapel Hill and spent three years helping to plan and raise funds for public television and enlarging the health affairs program at The University of North Carolina.

As a youth Kyser had been impressed by his mother's recovery from pneumonia through Christian Science when physicians had given up hope for her. Although raised as a member of the Baptist church, he was long interested in Christian Science and in 1967 became head of the film and broadcasting division of the Christian Science church, spending much time in the church's headquarters in Boston. He also was a lecturer for the church and traveled widely.

Kyser married Georgia Carroll, a soloist with his orchestra, and they became the parents of three daughters: Amanda, Carroll, and Kimberly. He was buried in the old Chapel Hill Cemetery.