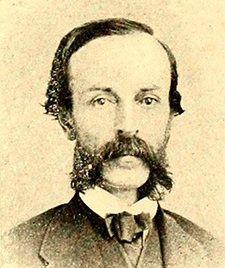 John Kimberly, chemist and educator, was born in Brooklyn, N.Y., the son of David and Elizabeth Ferris Kimberly. After receiving the B.A. from Yale and the M.A. from the Harvard Science School, he moved to North Carolina to teach at the Buckhorn Academy in Murfreesboro. He was awarded an honorary master of arts degree by The University of North Carolina in 1846.

In January 1857 Kimberly was elected to the chair of agricultural chemistry at The University of North Carolina vacated by Benjamin Hedrick. This position included laboratory instruction as well as teaching. Two years later, he persuaded the university that his usefulness as a teacher of chemistry would be greatly increased if he could study the newest discoveries in European chemistry. Kimberly and his wife spent the year 1859 abroad, mostly at Heidelberg, where he studied under Robert Bunsen. Returning to Chapel Hill, he significantly upgraded the laboratory offerings, incidentally instituting the first laboratory fee for supplies; students were also expected to provide their own glassware, dishes, crucibles, and expensive reagents.

Professor Kimberly was much admired for the strength of the agricultural chemistry program, one of the first in the country to offer practical laboratory instruction. (At the time, the idea of teaching students to work with their hands was revolutionary to the concept of a university.) He had little time, however, to build his program on the new ideas from Europe, for the Civil War set plans askew. Kimberly remained at the university when many students and faculty members went off to war. His responsibilities for courses in applied chemistry were increased by the assumption of the theoretical chemistry offerings when Professor William Martin left in 1861, and by November of that year he was directing all offerings in four departments—at a reduced salary.

Kimberly's contribution to the war effort was singular in North Carolina. In addition to teaching the dwindling classes at the university, he formed a company to make sulfuric acid and nitric acid for the Confederate Army and for North Carolina manufacturers; the nitric acid was then used to make gunpowder. He also performed analyses for the North State Iron and Brass Works. His advice on identifying sources of raw materials, the practical chemistry of chemical and steel manufacturing, and business aspects of chemical manufacturing was sought across the Confederacy. Much of his surviving correspondence with the Confederate States Nitre and Mining Bureau deals with improvements in procedures for the development of these products vital to the war effort.

In 1863 Governor Zebulon B. Vance assigned him responsibility for forming and directing a company of students to defend the university from attack by Union forces. Losses in the family of Mrs. Kimberly prompted him to obtain passports for his wife and children to move through the lines at Elizabeth City, thence to his father's home in Brooklyn, and finally to her family in Nashville.

Although the papers and money he buried before the arrival of the occupying Union forces were later lost through discovery, Kimberly was still able in the summer of 1865 to use some of the profits from his wartime businesses to purchase property in the western part of the state. Early in 1866, he went to Asheville at the urging of Governor David L. Swain and bought a 600-acre farm near Asheville, to which he retired during the summer, foreseeing the collapse of the university.

When it reopened in 1875, Kimberly was again offered his former chair. After a year as professor of agriculture, he resigned and returned to the farm. There his health declined for several years before his death. The homestead was on present Kimberly Avenue, and the farm covered what is now north Asheville.