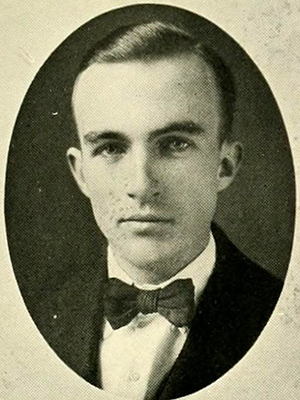 John Hosea Kerr, Jr., attorney and legislator, was born in Warrenton, the son of John Hosea and Ella Foote Kerr. He received his early education in the schools of Warrenton where he was an honor graduate and valedictorian of the Graham Academy in 1917. During the latter year he entered The University of North Carolina, from which he received the A.B. degree in 1921. In Chapel Hill, Kerr distinguished himself as a debater in the Philanthropic Literary Society and served as business manager of the Tar Heel while Thomas Wolfe was editor.

Kerr studied law at Wake Forest College (1922–23) and was admitted to the bar in 1923. After an additional year of legal study at George Washington University, he began a practice in Rocky Mount. In 1928, he was elected to his first term in the General Assembly as a member of the house for Edgecombe County. He returned to Warrenton in 1931 and established a permanent practice. In 1938 Kerr was again elected to the house, now representing Warren County, and was continuously reelected until 1949; for the 1943 session he served as speaker. After a single term in the state senate (1955–57), he served three more terms in the house (1957–63) before declining to seek reelection.

The legislator from Warrenton was the most noted orator and one of the most influential members in the General Assembly of his day. His speeches were presented ex tempore and none of the major addresses survive in recorded form. The most famous was delivered during the 1947 session in support of the Humber bill to establish the North Carolina Museum of Art. This bill, which sought an appropriation of one million dollars, had not previously attracted significant legislative support. Kerr's speech began: "I know that I am facing a hostile audience, but man cannot live by bread alone." The address was commonly credited with securing passage of the bill; among significant speeches in the state's legislative history, it was perhaps equaled only by the James C. Dobbin speech in support of the state mental hospital.

Despite extreme conservatism in fiscal and social matters, Kerr achieved a considerable record in support of innovative state programs. It is said that he obtained the initial state appropriation for the North Carolina Institute of Government, and he was an influential supporter of the North Carolina School of the Arts.

In addition to his legislative service, Kerr was an official of the state Democratic party, a trustee of The University of North Carolina, and a promoter of local improvements in Warrenton.

On 12 Nov. 1932 he married Mary Hinton Duke of Richmond, Va., and they had one child, John H. Kerr III. He died at age sixty-eight and was buried in Fair-view Cemetery, Warrenton.