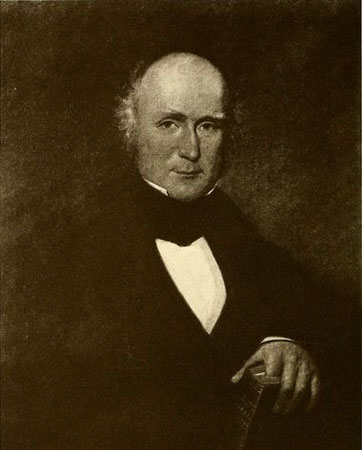 John Kerr, Baptist minister and congressman, was born in Gloucester District, southern Caswell County, of Scottish and English ancestry. He was the son of Mary Graves and John Kerr, a planter. Young Kerr was first employed as a teacher in the common English school begun by his uncle, General Azariah Graves, in Caswell County. In 1801, after attending a revival at Crossroads Presbyterian Church, he was converted, baptized, and began to preach. His first pastorate was in 1805 near Halifax, Va., at Arbor and Mary Creek churches. Elected to Congress as a Democrat from Virginia, he served from 1813 to 1815; although an unsuccessful candidate in the next election, he was subsequently elected to fill a vacancy and served again from 1815 to 1817. He was not a candidate for reelection.

Kerr seriously considered leaving the ministry for a legal and political career. While on a preaching mission, however, he was thrown from his gig and almost died from his injuries. Believing that his complete recovery was due to divine intervention, he cast aside his political ambitions.

Early in 1825 he was invited to preach for two weeks at the First Baptist Church in Richmond, Va. That February the church offered him the position of pastor at an annual salary of $1,000, which he accepted. His preaching drew great crowds, and it is said that he "took Richmond by storm." A deliberate, forceful, and emotional speaker, his sermons often lasted for two hours. During his tenure, he served as first agent of the Roanoke Baptist Association, first president of the Virginia Baptist Education Society, and president of the Baptist General Association of Virginia. In 1830 he presided over the meeting of the Education Society out of which the University of Richmond was born.

Kerr's desire to engage in evangelistic preaching caused him to resign the Richmond pastorate in 1832 and settle on a farm near Danville. From then until his death, Elder Kerr, as he was called in Baptist churches, was a leader in the establishment of missionary Baptist churches, preaching at camp meetings in Virginia and North Carolina. At one camp meeting in Northumberland County, Va., it was reported that 150 people joined the church. His crusades in Caswell County led to the founding of the First Baptist Church in Yanceyville and the Sycamore Church in southern Stony Creek township. In 1845, the latter church was renamed Kerr's Chapel in his honor.

In 1805 Kerr married Mrs. Elizabeth Williams of Halifax, Va., and they became the parents of six children: John, Jr., Nathaniel W. Williams, Sarah Lanier, Mary Graves, Martha (m. Dr. James Martin of Mocksville), and Frances (m. Thomas Dickson Connally of Milton). He died at his home near Danville and was buried in the Baptist church cemetery, Yanceyville. The Reverend J. B. Jeter, who succeeded him as pastor in Richmond, preached the funeral service on 25 June 1843, nine months after his death. Kerr's portrait was owned by a great-grandson, John Motley Morehead of New York City.