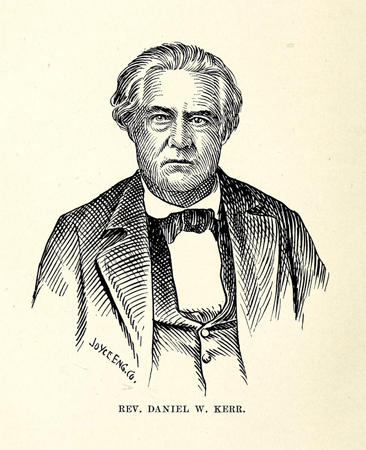 Daniel Wilson Kerr, clergyman, educator, and publisher, born in Cumberland County, Va., was a descendant of early colonists who first settled in Virginia's Norfolk County. The literary ability that was evident in Kerr's professional accomplishments indicates that he received a classical education in his youth. However, except that he married Rebecca Barham Davis, a cultured and refined lady, nothing has been found about his life until 1818, when he joined the Christian church founded by James O'Kelly. The following year he became a minister.

By 1826 Kerr was in North Carolina, for in that year he became principal of a school incorporated as the Wake Forest Pleasant Grove Academy, which was located twelve miles north of Raleigh on the road to Oxford. In 1836 he moved to Orange County and opened Mt. Pleasant Academy on 15 January. Located twelve miles northeast of Hillsborough and within a short distance of Mt. Zion Christian Church, the academy accepted only male boarding students and advertised that its courses would sufficiently prepare them for entrance into the state university. Within a few months, Principal Kerr changed the name of the school to Junto Academy and conducted it as such until 1849, when he moved it to Pittsboro.

Kerr was a member of the North Carolina and Virginia Christian Conference, one of several independent units composing the southern Christian church in the first half of the nineteenth century. Beginning in 1830 and for two decades thereafter, he served with distinction on numerous conference committees. His most outstanding contribution to the organization was his persistent efforts to found a church publication, through which he hoped to promote a union of the various conferences into one central governmental body. In 1833 he served on a conference committee that made a vain attempt to launch the Christian Intelligencer, and in 1840 he was a member of a similar committee that tried unsuccessfully to publish the Christian Protestant and Advocate of Union. After these failures, the Christians officially decided to endorse the Christian Palladium, published in Bloomfield, N.Y., by the northern Christian church. Kerr was delegated by the conference to serve as one of its official correspondents to the paper, and prospects appeared favorable for an eventual merger of the two Christian churches into one. However, the Palladium somewhat enthusiastically espoused the arguments of the Abolitionists, which alienated the southerners, and the merger was not consummated until 1922.

The thwarted conference, prodded by Kerr and others, decided to make a third attempt to found a periodical and, in a meeting at Union Chapel in Orange (now Alamance) County on 14 May 1842, voted to establish the Christian Sun with Kerr as editor. This time their plan succeeded and the first issue, printed by Dennis Heartt in Hillsborough, was dated 1 Jan. 1844, although not actually issued until February. The front page carried the caption "The Lord is a Sun and Shield" and an appealing editorial from the pen of the editor.

As a result of Kerr's promotional efforts, the Southern Christian Association was organized, composed of members from the various Christian conferences to supervise the management and promote the circulation of the paper. Largely due to Kerr's efficiency, the Sun survived and its influence increased; except for its suspension during the Civil War, it appeared regularly over a wide southern area until discontinued by the church in 1965. The promotional campaign carried on through the columns of the paper was the primary cause of a meeting in 1856 of the various Christian conferences, significantly at Union Chapel, on which occasion the organization of the Southern Christian Convention was accomplished. Kerr's dream of union was thus realized, but he did not live to witness its fulfilment for he was stricken with paralysis and died at age fifty-four. W. S. Gunter, one of his students, who was also clerk of the Superior Court of Chatham County, assisted Mrs. Kerr in publishing the Sun until the church could make new arrangements.

The Kerrs had no children and, after her husband's death, Mrs. Kerr taught in a school for young ladies in Alamance County. The editor was buried at Pittsboro and reinterred in 1857 at Union Chapel. On 14 Nov. 1944, the North Carolina and Virginia Conference of the Congregational Christian church (now the United Church of Christ) met at the site of Junto Academy and unveiled a suitable marker of native field stone to commemorate Kerr's career and the founding of the Christian Sun.