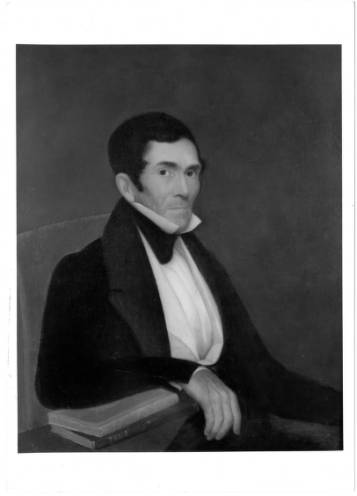 David Ker, minister, educator, lawyer, and judge, was born in Down Patrick, Ireland, of Scottish ancestry. He was graduated from Trinity College, Dublin, and was connected with Temple Patrick Presbytery. There is no record as to when he and his family reached North Carolina, but his name first appeared on the rolls of Orange Presbytery in 1789. Two years later he moved to Fayetteville, began regular Sabbath services at the courthouse, and taught school during the week. His school salary was about $400, and his congregation paid him a similar amount. The Reverend William Henry Foote recorded that Ker did not administer the ordinance of Holy Communion during his three years in Fayetteville and that no one knew whether there was a baptism.

In 1794 Ker left Fayetteville for Chapel Hill, where he became the first professor and first presiding professor of The University of North Carolina when it opened in 1795. The man who had been described earlier as "a man of piety and learning" became an "outspoken infidel." When attempts were made to change the organization at the school and install a president with Ker as professor of languages, he objected. He lived in what would be the residence of the president and demanded that, if he were forced to leave it, his salary be increased annually to include the value of the house. The trustees would not agree to his demands, and Ker remained in his position until July 1796. Because of the disorders in the student body during the previous session, Ker resigned against his will and the trustees accepted his resignation. Part of the dissatisfaction with Ker was based on his being "a furious Republican" as well as an "infidel," and the unrest and unruliness among the students probably stemmed somewhat from the discussion of his philosophy.

Leaving the university in a disgruntled frame of mind, Ker moved to Lumberton. In 1793 General John Willis, the Revolutionary War hero on whose plantation the town of Lumberton was built, was the prime mover in getting the legislature to authorize the establishment of an academy in Lumberton. In 1796, the General Assembly passed another law authorizing the trustees of the school "to lay off and sell a part of the town Commons, to raise a fund for the purpose of building said academy." The academy was ready for David Ker, who became its first principal while studying law and engaging in a small mercantile business. He subsequently was admitted to the bar.

In 1800, when General Willis emigrated to Mississippi, Ker, who also moved there at the same time, probably went as tutor to the Willis children. Ker settled in the Natchez neighborhood and, in 1801, opened in that town the first public school for females in the Mississippi Territory; he was assisted in the undertaking by his wife and daughters, who were "highly finished scholars and very elegant ladies." During the same year he was appointed sheriff and became clerk of court, both of Adams County. In the summer of 1802, President Thomas Jefferson appointed him to a judgeship, which gave "much satisfaction" to the citizens of the Mississippi Territory.

Early in 1805 Ker held court in an open, unheated house in severe weather and contracted an illness that ended his life. His widow taught school to support the family and outlived him by more than four decades. A devoted Christian, she burned all of Ker's papers after his death, fearing that his writings might wrongly influence others. He was described variously as "able and impartial," as having versatility in his genius, as being the "ablest and best judge on the bench," and as a "man of fine education, a classical scholar, well read in the principles of moral and natural philosophy, of law and religion."

Ker and his wife Mary had five children: David died unmarried at age twenty-three, John became a successful physician, Sarah married a Cowden, Eliza married Rush Nutt, and Martha (or Patsey) married William Terry. There are many of Ker's descendants throughout the United States, especially in Mississippi and Louisiana. Portraits of Ker and his wife are in the Southern Historical Collection at the University of North Carolina at Chapel Hill.

Biographical and Historical Memoirs of Mississippi (1891).

William Henry Foote, Sketches of North Carolina, Historical and Biographical, Illustrative of the Principles of a Portion of Her Early Settlers (1846).

Jethro Rumple, The History of Presbyterianism in North Carolina (1966).