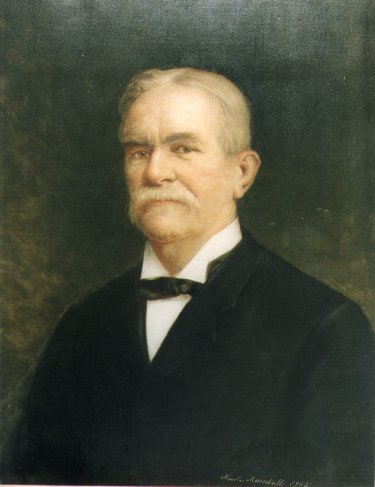 Joseph Forney Johnston, lawyer, governor of Alabama, and U.S. senator, was born at Mount Welcome, Lincoln County, the son of William and Nancy Forney Johnston. He attended the schools of North Carolina until age seventeen, when he moved to Alabama and entered high school in Talladega.

At the outbreak of the Civil War, Johnston enlisted in the Eleventh Alabama Regiment of the Confederate Army; by the end of the conflict he had attained the rank of captain in the Twelfth North Carolina Regiment. He was wounded in battles at Chickamauga, Spottsylvania Court House, New Market, and Petersburg. After the war he studied law in Jacksonville, Ala., under William H. Forney. He was admitted to the bar in 1866 and practiced in Selma until 1884, when he moved to Birmingham.

In Birmingham, a young but growing town, Johnston wasted no time in getting involved in various aspects of its expansion and economic development. He served as president of the Alabama State Bank from 1884 to 1894 and as president of the Sloss Iron and Steel Company from 1896 to 1900.

In 1896 Johnston ran as the Democratic nominee for governor, defeating Populist Albert T. Goodwyn by a vote of 128,549 to 89,290. His administration created several new state offices including those of the State Tax Commissioner, State Department of Insurance, and Chief Mine Inspector. Under his leadership, Alabama experienced renewed industrial growth, outside investments, greater funding for public education, and the development of hydroelectric power on the Tallapoosa River.

In his bid for a second term in 1898, Johnston defeated Gilbert B. Dean, another Populist, 110,551 to 50,052. This administration was marked by a loss of prestige and power because of some of the unpopular positions taken by the governor. In 1899, he became involved in a bitter dispute over the sale of coal lands owned by the University of Alabama to Sloss Sheffield Company. Johnston, who supported the sale, was the target of much criticism from people who claimed he had a conflict of interest in the deal. As a result of the controversy, the university kept the land and the governor's popularity floundered.

At the death of U.S. Senator Edmund W. Pettus in 1907, Johnston was appointed to serve the remainder of his term. Afterwards he was elected for a full term as senator and died in office.

On 12 Aug. 1869 Johnston married Theresa Virginia Hooper, and they became the parents of three sons, among whom were Edward Douglas and Forney. He was buried in Elmwood Cemetery, Birmingham.