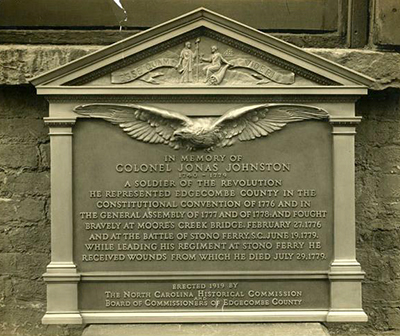 Jonas Johnston, Revolutionary War officer, Edgecombe County official, and state legislator, was born near Courtland in present Southampton County, Va., the son of Jacob Johnston, Sr., and Mary Waller Johnston. In 1757 his parents settled on Town Creek in Edgecombe County, N.C. Although his formal education was limited, young Johnston had a natural gift for oratory accompanied by a keen, practical intelligence that soon elevated him to a position of leadership in the plantation society of which he was from early adulthood a respected and substantial member.

On 31 May 1771, the Edgecombe County Court appointed Johnston to the public office of magistrate to take the taxes and taxables. His potential capacity as a military leader was first recognized at the Battle of Moore's Creek Bridge on 27 Feb. 1776, when he served as captain of an Edgecombe County company in suppressing the Tory and Loyalist menace to the Patriot cause in North Carolina. About that time he was described as "robust in person, active, and capable of bearing much fatigue, vigilant and brave as an officer, and high-spirited and honorable as a man; which, joined to a mind distinguished for its strength and fortitude, rendered him an invaluable auxiliary in defense of the liberty of his country."

On 19 Apr. 1776, Johnston was appointed by the North Carolina Provincial Congress at Halifax "to receive, procure and purchase fire arms for the use of the troops," and three days later he became first major of the field officers of the Edgecombe Militia Regiment. On 12 November he was one of the three representatives from his county who took their seats in the Provincial Congress meeting at Halifax, which on 23 December ratified his appointment as a justice of the peace. He was still a member of the General Assembly in 1777 and on 2 September was named recruiting officer for his county in the Halifax Military District.

The records of the General Assembly contain numerous references to the important committees on which Major Johnston served constructively in 1777 and 1778, and a number of his surviving letters to Governor Richard Caswell reveal both his intelligence and his dedication to duty. Because of his election as entry taker in Edgecombe County, Johnston was forced to relinquish his place in the General Assembly on 28 Apr. 1778, but on 8 August he was properly seated again in the session at Hillsborough and ready to take part in the work of several committees.

At home between sessions, Johnston was occupied with a great variety of civic, domestic, and military duties. By 24 Nov. 1778 he held the rank of lieutenant colonel in the Edgecombe County Regiment, and on the following 19 January he was again seated in the General Assembly at Halifax. With the deteriorating military situation in South Carolina, Colonel Johnston rejoined the Edgecombe County Regiment and proceeded in early April to the vicinity of Camden and later of Charleston where, in the Battle of Stono Ferry on 20 June 1779, he "greatly distinguished himself for his personal courage and the skill with which he handled his men."

Subsequently Johnston was ordered to march his regiment against the Tories, who had become very troublesome in the Upper Pee Dee area. By the time his force reached Drowning Creek (now Lumber River), the colonel became so violently ill that he could proceed no farther and was taken to the home of his friend, Thomas Amis. There, the best of care could not save him. His wife, who had been sent for, arrived in a borrowed gig several days before his death. Because it was impossible for her to transport his body 140 miles through the summer heat, Johnston was buried in a small neighboring graveyard. Many years later, when his descendants wished to return his remains to the family cemetery in Edgecombe County, this graveyard could not be located.

On 17 Nov. 1768 Johnston married Esther Maund (15 Feb. 1751/52–19 Dec. 1840), the daughter of Lott and Prudence Hughlett Maund of Norfolk County, Va. She was described as "a woman who, in good sense, in resourcefulness, and in strength of character, seems to have been quite his equal." Esther Johnston never remarried, but completed the unfinished interior of their new home, carried on the plantation business, reared five children, and bravely endured the effects of paralysis during her last fifteen years of life. She was awarded a Revolutionary War Widow's Pension only a few years before her death. Her informative tombstone less than two miles east of Pinetops is still legible. A handsome bronze memorial to her husband is located in the lobby of the Edgecombe County Courthouse.