Jane Claudia Saunders Johnson, Confederate heroine, was born while her parents, Romulus M. Saunders and Anna Hayes Johnson, were living at Elmwood on Hillsborough Street in Raleigh. Her father, a native of 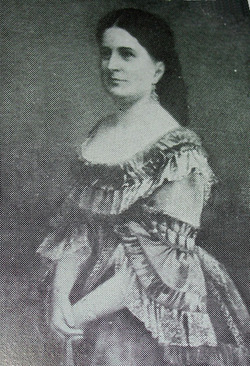 Caswell County, was the state attorney general; her mother was a daughter of William Johnson, of South Carolina, a justice of the United States Supreme Court. Because she lived just two blocks from St. Mary's School (which her sister attended), she probably was educated there, but school records for those years do not exist. From 1846 to 1849 she lived abroad and spent the winters in Paris while her father was minister plenipotentiary to Spain, where he was secretly authorized by President James K. Polk to negotiate with Spain for the purchase of Cuba by the United States. Presented at the Spanish court, Jane became a friend of Eugnie de Montijo, Countess of Teba, and of her future husband, Charles Louis Napoleon Bonaparte, Napoleon III.

Saunders's appointment was terminated near the end of September 1849 and his family returned to Raleigh. At Christ Episcopal Church on the evening of 25 June 1851 Jane Saunders married Bradley Tyler Johnson, twenty-two, of Frederick, Md., a graduate of Princeton and recently admitted to the bar. He became active in Maryland politics and in April and May 1861 recruited troops for the First Maryland Regiment for Confederate service. He and his colleagues hoped to steer the whole state in that direction and even had plans to kidnap the governor, who held Unionist sentiments. Their plans were thwarted, but they easily raised a battalion, largely in Baltimore. When their hopes for Maryland's entry into the Confederacy failed, the men went to Virginia to await formal organization and in hopes of securing equipment. They were soon joined by the militia from several Maryland counties as well as assorted local military units from the state. Bradley T. Johnson was captain of Company A, and his wife and their five-year-old son, Bradley Saunders Johnson, joined him.

Anxious to serve the South and to ensure that Maryland would be represented by its own sons in their own unit rather than have them absorbed into other units, the leaders faced a serious crisis. The men lacked uniforms, arms, and ammunition. Jane Saunders Johnson suggested that she be permitted to go to Raleigh to seek assistance. Her father's influence and her own acquaintance with leaders of the state might be effective, it was felt. Colonel Thomas J. Jackson, commanding officer, approved the plan, provided transportation, and assigned a captain and a lieutenant to escort her along a route that led to Winchester, Strasburg, Manassas Junction, and Richmond, and from Richmond to Raleigh. Leaving camp on 24 May 1861, they found the way blocked by Federal troops at Alexandria and had to change their route. Nevertheless, they reached Raleigh on the night of the twenty-seventh. The next morning, accompanied by her father, she called on Governor John W. Ellis to explain her purpose.

At the same time the Secession Convention was still in session, and delegates were inspired by word of the patriotism of so many Maryland men. It was also said that they greeted the news of Jane Saunders Johnson's mission with enthusiasm. Addressing the convention, former Congressman Kenneth Rayner said: "If great events produce great men—so in the scene before us we have proof that great events produce great women. . . . One of our own daughters, raised in the lap of luxury, blessed with the enjoyment of all the elements of elegance and ease, ha[s] quit her peaceful home, followed her husband to the camp, and leaving him in that camp, has come to the home of her childhood to seek aid for him and his comrades, not because he is her husband, but because he is fighting the battles of his country, against a tyrant."

Governor Ellis instructed one of his aides, Lieutenant Alexander W. Lawrence, an ordnance officer from Raleigh and undoubtedly known to Mrs. Johnson as they were the same age, to provide her with 500 rifles, 10,000 cartridges, 3,500 caps, and other "necessary equipments." Not lingering to enjoy a visit, Mrs. Johnson saw the equipment loaded in a boxcar and on the twenty-ninth boarded the car, took a seat atop the wooden box containing the rifles, and began the return trip. Word of her deed spread, and she was greeted by an "ovation" at every stop. The governor of Virginia gave her a quantity of camp kettles, hatchets, axes, and other equipment, and with money handed to her along the way she was able to order 41 tents in Richmond. Arriving in camp on 3 June, the equipment was promptly put to use by the troops.

Bradley Johnson saw service in numerous engagements in Virginia, was promoted to brigadier general, and late in 1864 and the early months of 1865 was commander of the Confederate prison at Salisbury, N.C., where he arranged for Federal officials to deliver some clothes and blankets to the prisoners held there. Mrs. Johnson was with her husband throughout much of the war, but the full extent of her travels is not clear from the records.

After the war Johnson practiced law in Richmond and served in the state senate (1875–79); he then practiced in Baltimore (1879–80) before moving to The Woodlands, the family home near Amelia Courthouse, Va. Mrs. Johnson died at The Woodlands and was buried in Baltimore. Veterans from among the troops that she helped to equip erected a large monument over her grave with the inscription " . . . in loving memory of a Noble Woman." In her will she directed that specific pieces of jewelry go to her daughter-in-law, Ann Rutherford Johnson; to a niece, Jeannie C. Saunders; to a cousin, Annie I. Poe; and to her sister-in-law, Mrs. Charles Schley of Milwaukee. Other gifts were left to her son, Bradley, Jr., and silver and china to her grandson, Bradley Tyler Johnson, Jr. She also left her grandson the regimental flag given to her by the men of her husband's unit during the Civil War.