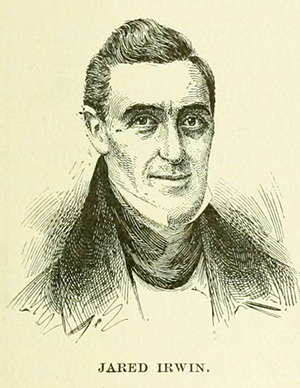 Jared Irwin, Revolutionary War officer and governor of Georgia, was born in that part of Anson County that later became Mecklenburg County, the son of Thomas and Rebecca Lawson Irwin. About 1757 his family moved to Burke County, Ga., where he spent his childhood on the Indian frontier. During the American Revolution he and his father and three brothers saw active service, with Jared attaining the rank of colonel and fighting in South Carolina as well as near Augusta. For their service, these men in 1784 received land grants in Washington County, Ga., where they also built a fort. Jared settled there in about 1787.

Irwin held a number of local offices including inferior court justice, justice of the peace, and road commissioner; after moving to Washington, he served with commissioners in negotiating treaties with the Indians. As early as 1783, he participated in the first of a number of conventions and legislatures in the formation and inauguration of the state government. He also served in the convention that ratified the federal Constitution. He was a member of the state legislature from 1790 to 1811, except during the years when he was governor of Georgia (1796–98 and 1806–8). During his first term as governor, he took satisfaction in signing a bill to rescind the Yazoo land act by which a previous legislature, through bribery, had sold thirty-five million acres of western land to four land companies for 1.5 cents an acre.

Although the records are not clear, it appears that Irwin was married twice. His first wife's maiden name was Steward; his second wife's given name was Isabella, whom he probably married after 1772. His children were Rebecca, Mary Elizabeth, Nancy, Thomas, John, Jared, Jr., Jane, Isabella, and Ann. In addition, he adopted a nephew, Jared, Jr., the son of his brother Alexander. Two of his sons, Jared, Jr., and Thomas, were among the earliest graduates of the University of Georgia after it opened in 1801. Irwin died at his home, Union Hill, where he was buried near Ohoopee Baptist Church.

Robert Sobel and John Raimo, eds., Biographical Dictionary of the Governors of the United States, vol. 1 (1978).