Roswell Huntington, Revolutionary silversmith in Hillsborough and founder of three generations of silversmiths, was born in Norwich, Conn., the son of Ebenezer, Jr. (1740–63), and Sarah Edgerton Huntington, and a descendant of Simon and Margaret Baret Huntington (fl. 1633). Before Roswell was a year old his father died in the West Indies, apparently late in 1763, at age twenty-three. Ebenezer's will was probated in Norwich in January 1764. On 15 June 1765, his widow married Joseph Gale.

On 5 Apr. 1769 the court in Norwich appointed Captain Daniel Throop, of Lebanon, Conn., a relative by marriage, as guardian of six-year-old Roswell, requiring a bond of £500. Before Roswell's majority, two later guardians were successively appointed, William Huntington of Lebanon in 1774 and Andrew Huntington, also of Lebanon, in 1777. Although there are discrepancies in the recorded dates of Roswell's brief military service, both he and his guardian William Huntington apparently enlisted in the Third Connecticut Regiment in early May 1775, and both were discharged on 16 Dec. 1775. The youthful Roswell is said to have participated in the defense of New London. 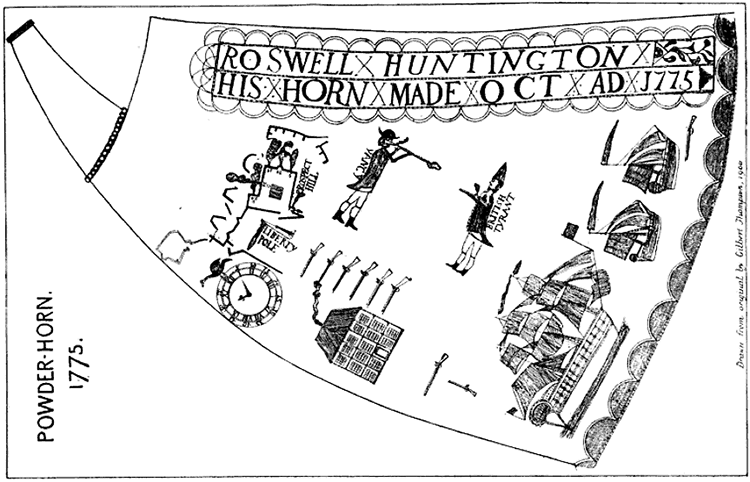 He was early apprenticed to Norwich silversmith Joseph Carpenter, and in 1784 at age twenty-one (when he had evidently inherited his legacy) advertised himself as a goldsmith and jeweler in Norwich opposite the store of his relative, General Jedediah Huntington. No signed specimens of his early Connecticut work appear to have been preserved.

The precise reasons for Huntington's relocation in the village of Hillsborough are unknown, but there is said to have been a distinct migratory strain or propensity discernible on his paternal side. It is also possible that there was some connection between the movements of Roswell and the Joseph Gale family.

On 3 Mar. 1785, the Orange County Court of Common Pleas and Quarter Sessions bound over to Roswell Huntington as an apprentice thirteen-year-old Francis Nash "to learn the art and Mistery of a silver and goldsmith." On 6 October, Huntington advertised in the North Carolina Gazette for a "Journeyman Goldsmith and Jeweller who is a good Workman. . . . [He] will meet with good encouragement and constant employ." At the 25 Aug. 1786 sale of confiscated property in Hillsborough, he purchased corner Lot 21 on West King Street, formerly the property of Edmund Fanning, for £501 which he almost certainly did not pay in cash. Although he kept the lot only fifteen months, Huntington appears to have acquired or rented farmland in the old Quaker community on the Eno River near Maddock's and Low's Mills, to have held another Hillsborough lot (91) briefly, and to have acquired at least a dozen slaves. It has not been determined, however, where his first silversmith's shop was located in Hillsborough.

In 1789 Huntington was paid £5 as one of the nine members of the Orange Company of Horse selected to guard the North Carolina Treasury's money being transferred from the temporary State Treasury (the old Blue House) in Hillsborough to Fayette or Fayetteville. The same year he married (date of bond, 12 October) Mary (May) Palmer, daughter of carpenter and planter Martin Palmer and Priscilla Bivens (or Bivins) Palmer, said to have been the daughter of one Captain Bivens, an itinerant sea captain. Roswell and his wife had seven children: Sarah, William, Martin Palmer, Priscilla, Nancy, Elizabeth, and John, and the three sons were all trained as silversmiths in their father's shop. Although there are various links between the Huntington family and the Eno Meeting of Friends, there appears to be no proof that either the Huntingtons or the Palmers were Quakers. 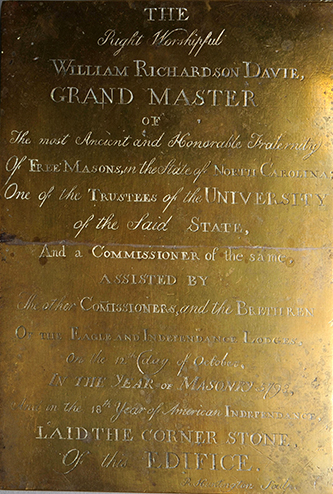 In 1792, at age twenty-nine, Huntington was commissioned to engrave a bronze plate or plaque to be placed in the cornerstone of Old East, the first building to be constructed on the new University of North Carolina campus and now a National Historic Landmark. A Latin inscription was engraved in flowing letters on one side of the plate with its English translation on the other, and the whole was signed "R. Huntington, Sculp." The cornerstone was set with due Masonic ceremony on 12 Oct. 1793. This is one of the few identified pieces of Huntington's work, and it is in bronze, not gold or silver. It seems, in fact, likely that he may also have done considerable work as a brazier, for in 1820 he advertised in the Hillsborough Recorder for some weeks for "Clean old brass." The historic Huntington plate was removed from the Old East cornerstone during Reconstruction and turned up years later in a pile of scrap metal in a Clarksville, Tenn., foundry, the owner of which formally restored it to the university on 12 Oct. 1916.

Recently, two graceful teaspoons (part of a set of six), bearing the mark "R. H.," have come to light. These carry the initials "J. H." on the front and were apparently made about 1805 for John Holden, Sr. (1764–1842), a well-to-do planter of the St. Mary's Chapel community near Hillsborough. According to Holden family tradition, the spoons were made from John Holden's silver buckles worn on his knee breeches and shoes. A teaspoon in an Oxford collection, bearing the mark "Huntington," may also be Roswell's work. Signed Roswell Huntington silver appears to be extremely rare.

There are few mentions of Huntington in Hillsborough after 1820. It seems certain that his wife, May Palmer Huntington, died between 1831 and 1833, and it is likely that she was buried near her parents in a grave marked only by rough stones in the rock-walled Quaker Cemetery northeast of Hillsborough. In December 1833, the seventy-year-old Huntington, accompanied by four of his children—William, Sarah (a widow), Elizabeth, and Priscilla—migrated to Marion, Perry County, Ala., as part of the considerable movement southward of Hillsborough residents in the 1830s. His youngest son, John, also migrated to the South in 1837 and settled finally at Pontotec, Miss.

Roswell Huntington lived only three years in his new home. He died suddenly, as his obituary in the Milton (N.C.) Spectator of 27 Sept. 1836 stated, "of rheumatism of the chest . . . he was greatly esteemed . . . for his amiable disposition and willingness to perform acts of kindness." He was buried in the Marion Cemetery where his tombstone inscription, composed by his grandson, describes him as "a soldier of the Revolution . . . upright and honest in all the relations of life." It is possible that two unidentified oil portraits belonging to the Huntington family are likenesses of Roswell and his wife.

The Huntington-trained group of silversmiths may be said to have included nine craftsmen: Roswell and his three sons, William, Martin Palmer, and John; William's son, William Henry; and the Huntingtons' Hillsborough apprentice, Lemuel Lynch, and Lynch's three sons, Thomas M., Lemuel George, and Seaborn, Jr., the latter known as an "intermittent" silversmith.

"The Presentation of the Plate," University of North Carolina Alumni Review, vol. 5 (November 1916).