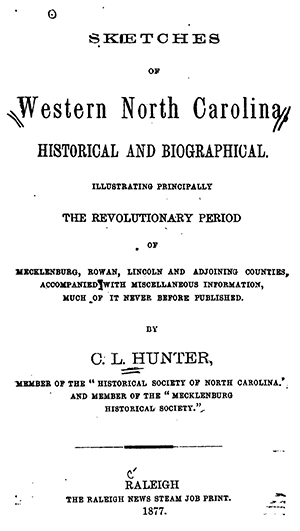 Cyrus Lee Hunter, physician, scientist, and historian, was born in Lincoln (now Gaston) County, one of ten children of the Reverend Humphrey and Jane Ross Hunter. His father, of French Huguenot-Scots ancestry, was born near Londonderry, Northern Ireland, and came to America at an early age; educated in both medicine and theology, he became a Presbyterian minister after a lengthy service in the American Revolution. Jane Hunter was the daughter of Dr. George Ross of Laurens District, S.C.

In 1834 Cyrus Lee Hunter married Sophia Forney, the youngest daughter of General Peter Forney, and settled in the Machphelah area of Lincoln County. There he established a medical practice that extended into the adjacent counties. In addition, Hunter owned a prosperous gristmill, the gift of his father-in-law, situated on a creek near his home. After the Civil War the mill was modernized and operated by his son-in-law, John H. Sharp, until 1885, when it was rendered inoperable by the opening of the channel of the creek. Hunter's ability as a businessman was recognized by his neighbors, many of whom brought him their money to invest, a service he performed with honesty and efficiency. It is said that no one ever lost a penny by him.

Hunter's library was considered to be one of the largest and best in his area of the state, and he was widely recognized as a scholar. He had a strong interest in botany and collected over two hundred specimens of North Carolina woods. Placed on exhibit at the exposition in Venice, Italy, in 1875, this collection was lost and never recovered. Hunter is credited with the development of the Catawba variety of grape and with the discovery of two rare varieties of wild plants. He was also an avid student of entomology, herpetology, and mineralogy. His interest in minerals was stimulated by the fact that he lived within the placer gold mining area of North Carolina. The wedding rings of his daughter and daughter-in-law were made of gold mined on his own estate. Hunter's extensive mineral collection was exhibited at the Centennial Exposition, Philadelphia, in 1876.

Hunter corresponded with a number of scientists, including John James Audubon and Louis Agassiz. Unfortunately, these interesting letters, along with his other papers and his library, were destroyed in the fire that razed his home shortly after his death. Hunter reported some of the results of his scientific investigations in various articles he wrote for such periodicals as the North Carolina University Magazine and the South-Atlantic.

After the Civil War his scholarly interests turned to history. In 1875 he was one of the incorporators of the Historical Society of North Carolina, and in 1877 he published his Sketches of Western North Carolina. Several of these sketches were original, but others, including that of his father, were condensed from John H. Wheeler's Historical Sketches of North Carolina. Wheeler also provided Hunter with information from the records of the Pension Bureau, Washington, D.C., relating to the military service of several Revolutionary War soldiers. At the time of his death Hunter had almost completed a similar series of sketches for eastern North Carolina, which would probably have been edited and published had his manuscript not been consumed in the fire that destroyed his white frame mansion, Vine Hill.

Hunter and his wife Sophia had five children. Two daughters died young. Their two sons, Henry Stanhope and Captain George William Hunter, served in the Confederate Army, and the latter was mortally wounded at Chancellorsville. Their youngest daughter, Sophia, married John H. Sharp of Norfolk, Va. Sophia Forney Hunter died about 1845. On 20 May 1851, Hunter married Catharine F. Lyman of Massachusetts. They had one son, Lee, who married Pickett Myers. Myers Hunter, Lee's son, like his grandfather, was a physician and practiced in Charlotte. Cyrus Lee Hunter died suddenly on his way home from attending church services at Castania and was buried in Machphelah Cemetery, Iron Station (Lincoln County).

Transactions of the Medical Society of North Carolina (1930).