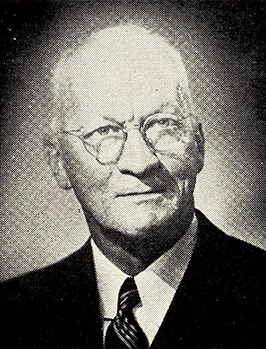 Robert Obediah Huffman, industrialist and businessman, was born in Morganton, the son of Samuel and Martha Ann Hildebrand Huffman. His father, a Morganton businessman, was one of five founders and the first president of the Drexel Furniture Company of Drexel. Young Huffman attended the Morganton city schools and The University of North Carolina, where he received the A.B. degree in 1913 and an honorary LL.D. degree in 1954.

Although Huffman held positions in many different businesses and industries, he was most active in hosiery and furniture manufacturing. He was treasurer (1927–44) and president (1944–58) of the Morganton Full Fashioned Hosiery Company; president (1935–56) and chairman of the board (1956–59) of Drexel Knitting Mills; and president (1935–58) of Huffman Full Fashioned Mills, Morganton. In 1935, when the death of his brother, Frank O. Huffman, left the office vacant, he became president of the Drexel Furniture Company; that year the company had sales of $1,336,119. To illustrate the impact of his career on the community, in 1968 at the time of Huffman's retirement as chairman of the board of Drexel Enterprises, which included the Drexel Furniture Company, the corporation had reached annual sales of $78,400,000 and employed 6,300 persons. Drexel Enterprises, a holding company, had been organized in December 1961, with Huffman as president and chairman of the board. Earlier, in 1957, Drexel Furniture had acquired Morganton Furniture Company and Heritage Furniture Company of High Point through stock exchanges. These two companies became known as the Heritage-Morganton division of Drexel Enterprises. In 1962, through a merger, the Southern Desk Company of Hickory also became a division of Drexel Enterprises.

In the fields of banking and insurance, Huffman served one or more terms as director of the First National Bank, Morganton; Charlotte Branch, Wachovia Bank and Trust Company; Jefferson Standard Life Insurance Company, Greensboro; North Carolina Board, Liberty Mutual Insurance Company, Charlotte; and Federal Reserve Bank, Richmond, Va. Additional positions included president of the Burke Farmers Cooperative Dairy (1940–61) and of the Business Foundation at The University of North Carolina (1950–51). For many years he was a director of Grace Hospital in Morganton.

During World War II and the postwar period, Huffman served the U.S. government in various positions. He was chief of the men's hosiery unit, textile division, War Production Board (1943); a consultant on hosiery, chief of the hosiery and underwear section, and price executive of the manufactured articles branch, Office of Price Administration (1944); and assistant director of the consumer soft goods division, Office of Price Stabilization (1951).

Huffman was long active in the civic and religious life of his community, including sometime mayor of Morganton and chairman of the Morganton School Board. He was a member of the board of trustees of Mars Hill College and of the Development Council and Board of Visitors of Wake Forest University; on both campuses a building was named for him. He also served on the board of trustees of South Mountain Institute, a child-caring institution at Nebo. For fifteen years he was chairman of the Board of Deacons of the First Baptist Church, Morganton, where for thirty years he taught a men's Bible class.

In 1956 the Rotary Club, with Senator Sam J. Ervin, Jr., as speaker, presented to Huffman the Morganton Man of the Year Award. During a dinner held in Charlotte in 1963, the Newcomen Society in North America honored Huffman and Drexel Enterprises for the leadership they had given the southern furniture industry in the previous quarter century. Huffman was said to have taught the South how to style and market furniture. He explained at the dinner that the most significant element in the philosophy behind Drexel's success was "that every person who works for the company is important . . . that employees may vary in ability and responsibility, but Drexel considers each an individual, himself, and important in the operation."

Huffman was a member of Phi Beta Kappa, Beta Gamma Sigma, and the Golden Fleece. He was a 32nd degree Mason. Other memberships included Kiwanis, New York Athletic Club, Merchants and Manufacturers Club (Chicago), Biltmore Forest Country Club (Asheville), Mimosa Hills Golf Club (Morganton), and Linville Golf Club (Linville). In addition to golf, his hobbies were raising Guernsey cattle and fishing. He was a Baptist and a Republican.