Rednap Howell, "poet of the Regulators," moved to North Carolina from New Jersey, probably in the early 1760s. He settled first in present Chatham County, then moved about 1768 to what is now Randolph County. Howell is supposed 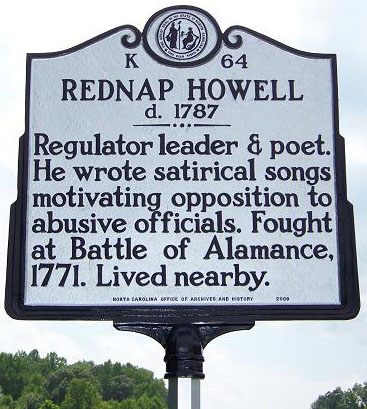 to have been a teacher and certainly was well educated for his time. He wrote several "Regulator poems" satirizing the men and events associated with the Regulator uprising in North Carolina from 1768 to 1771. He may also have written some of the "Regulator Advertisements" that he signed, as well as a pro-Regulator pamphlet entitled "A Fan for Fanning and a Touchstone for Tryon."

Howell first appeared on the Regulator scene in May 1768 as one of the signers of a petition to Governor William Tryon, stating the grievances of the western North Carolina farmers against the appointed county officials. Howell and James Hunter carried the petition to Tryon, who refused to hear their grievances and demanded that the Regulators pay their taxes and obey the laws of the province.

In the summer of 1768 Tryon led a military expedition through the Regulator counties, but met with no formal resistance. This expedition, coupled with a promise to hold new elections in 1769, quieted the opposition for some time. The elections were held and several pro-Regulators were sent to the provincial legislature. However, when that body was dissolved after only four days in session, the Regulators once again took action. In September 1770, they prevented court from being held in Hillsborough, the seat of Orange County. Howell was later indicted in connection with this incident, although he probably did not take part in the more riotous actions of the mob.

In January 1771 Howell learned that Herman Husband, another Regulator leader, had been imprisoned in New Bern and began raising a force to release him. Because Husband was released by the court, the expedition did not take place. Subsequently, Tryon raised another force of eastern militia and again set out to punish the Regulators. At the Battle of Alamance on 16 May 1771, his militia easily defeated the badly organized Regulators. Howell was present at the beginning of the battle, but is thought to have left the field without taking part in the fighting. Nevertheless, he was outlawed by Governor Tryon and a reward was offered for his capture, dead or alive.

After Alamance, Howell fled to Maryland and later returned to New Jersey, where he died. As far as is known, he never married.

A fan for Fanning, and a touch-stone to Tyron containing an impartial account of the rise and progress of the so much talked of regulation in North-Carolina, by Regulus. 1771. Boston: Printed and sold [by Daniel Kneeland?] at the printing-office, opposite the seat of William Vassel Esq; at the head of Queen-Street. https://www.worldcat.org/oclc/799819706 (accessed March 5, 2013)